A police lieutenant who was shot while off-duty was in critical but stable condition on Thursday evening.

NEW YORK - An off-duty NYPD lieutenant was in critical but stable condition after he was shot multiple times while leaving a nightclub in Woodside, Queens early Thursday morning, said police. The suspect was shot and later died at a local hospital.

At about 3:16 a.m., the officer was leaving club La Boom at 57th Street and Northern Boulevard when he was fired upon several times in what may have been an attempted robbery, said police. The gunman unloaded nine rounds striking the lieutenant in the chest.

The off-duty officer fired back eight times striking the suspected gunman once in the stomach and once in the leg. The suspect was pronounced dead about 20 minutes later at Elmhurst Hospital.

"He is lucky to be alive," NYPD Commissioner Dermot Shea said in a briefing from Elmhurst Hospital. "Everyone should keep him in your thoughts and prayers today. We would have a very different outcome if not for the FDNY paramedics that did incredible work on the street to get him here and Elmhurst Hospital for taking it from there."

Police Commissioner Dermot Shea says an off-duty lieutenant who was shot several times is lucky to be alive. Shea thanked and praised the EMS team and the staff at Elmhurst Hospital for saving his life.

Two or three others suspects fled the scene wearing full-face masks and were armed, said police. A manhunt was underway.

A gun with an extended magazine believed to be the suspect's weapon was recovered at the scene. The suspect, who was not yet identified pending family notification, had one prior arrest for gang assault.

Search for 3 suspects in cop shooting

The NYPD is searching for three masked suspects who fled the scene of a shooting in Queens. An off-duty lieutenant was shot and critically injured. The gunman was shot and killed.

A woman who was inside the club at the time told FOX 5 News that a concert was underway when the performer, rapper Myke Towers, was pulled from the stage. A security guard told some of those inside to leave.

It was not clear if the gunman had any interaction with the lieutenant prior to the shooting.

NYPD Police Commissioner Dermot Shea said that the off-duty lieutenant was shot several times. He was in critical but stable condition.

Police were investigating the possibility the shooting was related to other incidents.

"There is a citywide pattern of individuals going to nightclubs wearing jewelry and being targeted," said Shea.

Anyone with information about the other suspects was asked to call the NYPD Crime Stoppers at Hotline at 1-800-577-TIPS (8477). The public can also submit their tips by logging onto the CrimeStoppers website at https://crimestoppers.nypdonline.org or on Twitter @NYPDTips. 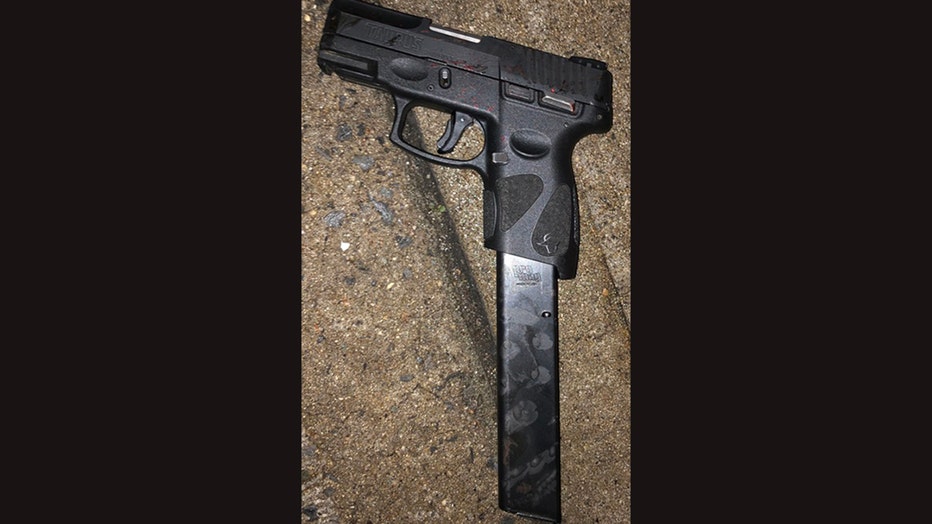 The NYPD recovered this weapon believed to be the gun used by the suspect who shot an off-duty lieutenant outside a Queens nightclub.

An off-duty NYPD officer was shot and a suspect killed in Woodside, Queens.