NYPD officer released from hospital after being shot on duty

An NYPD officer who was shot in the arm while on patrol in the Bronx has been released from the hospital, while one teenage suspect is under arrest and police continue to search for two other suspects.

NEW YORK - An NYPD officer was released from the hospital after being shot in the arm in the Bronx early Tuesday morning.

Police say one suspect, a teenager, has been taken into custody and a search is ongoing for two more after the early-morning gunfight.

The incident took place just after 3 a.m. in the area of 183rd St. and Prospect Ave. in the Belmont section.

Two uniformed NYPD officers were patrolling in an unmarked car as part of an anti-gang unit.  They came across two people at the corner and tried to interact with them when six shots rang out.

One of the bullets went through the windshield of the vehicle. The uniformed officer from the 48th precinct was hit in the left arm.

The NYPD officer who was shot in the left arm during a shootout with two teenagers in the Bronx early Tuesday morning was released from the hospital later that day. Police say they are still searching for two suspects linked to the shooting.

Both officers got out of the vehicle and returned fire.  Other officers arrived and chased one of the suspects.

A 16-year-old was quickly caught and taken into custody.  The NYPD says he was carrying a .32 caliber gun at the time of his arrest.

Police say other shots from a second shooter rang out during the chase.

The officer who was shot was taken to St. Barnabas Hospital and was listed in stable condition.

The New York City mayor talks about the shooting of a police officer in the Bronx.

At a news conference inside the hospital, Mayor Eric Adams said he had talked to Officer Lee and his family.

The NYPD says they were still searching for the other two people in connection with the shooting.

Police warn that they might be armed with a gun.

The NYPD showed images of the gun they found on the suspect and a bullet hole through the windshield of the car. 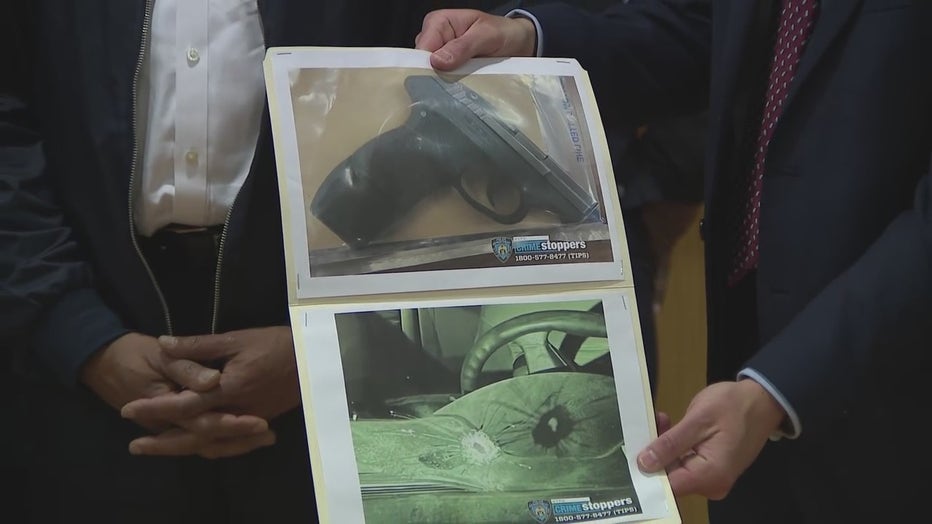 The NYPD showed images of the gun they found on a suspect in a police shooting and a bullet hole through the windshield of the car.