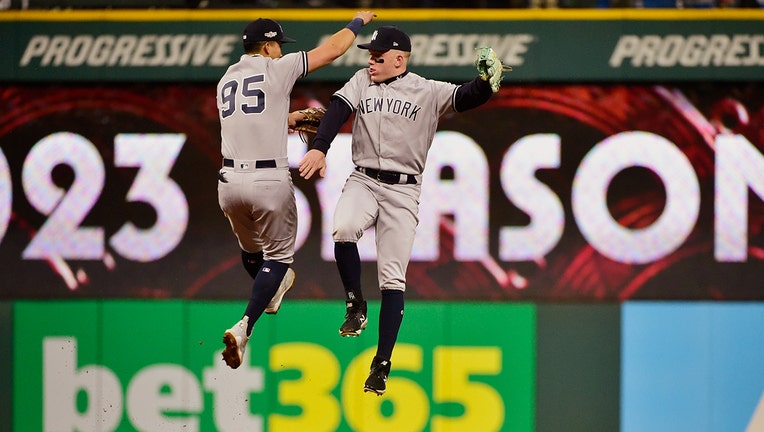 NEW YORK - After fans waited through a 2 1/2-hour rain delay, Major League Baseball postponed the decisive Game 5 of the AL Division Series between Cleveland and New York — and the Yankees announced Nestor Cortes will start on short rest Tuesday against the Guardians.

Cleveland was expected to stay with Aaron Civale for the game, which was rescheduled for 4:07 p.m.

Neither manager spoke with media after Monday night's rainout, and Yankees spokesman Jason Zillo said Aaron Boone had texted him with the change to Cortes in place of Jameson Taillon.

"Once it became clear that it was going to be well after 10 o'clock when the game was going to start, I think we felt like it was a no-brainer," said Chris Marinak, MLB's chief operations and strategy officer.

The winner will have a short turnaround, traveling to Houston to face the Astros in the AL Championship Series starting Wednesday at 6:37 p.m. CDT.

Cortes, a first-time All-Star who went 12-4 this season, allowed two runs over five innings Friday in Game 2, which the Yankees lost 4-2 in 10 innings. He threw 99 pitches.

His only time starting on short rest was Sept. 10, 2019, at Detroit, when he was used as an opener and left with a 6-1 lead and two runners on in the third inning. Cortes allowed four runs — two earned — and six hits in 2 1/3 innings while throwing 46 pitches in the Yankees' 12-11 loss. He had thrown 16 pitches in relief four days earlier at Fenway Park.

Civale was in Cleveland’s rotation before being sidelined three times this season with injuries.

"You don’t ever want to just say no. But I think (pitching coach Carl Willis) and I, both our thoughts were that we weren’t leaning towards that as an option that we really wanted to do, just because of what he’s been through and everything," Francona said last Thursday.

Yankees general manager Brian Cashman would not address the pitching change and said it was not his call to make Boone available to reporters.

"He’s had a rough go of it. We got in late last night and been here all day. We've got a lot on our minds," Cashman said.

"The forecast was that any point from 7:30, 8, 8:30, 9 at the latest, worst-case scenario, we could get this thing in. It’d be dry after," he said. "It slowed down on us. So, obviously it adjusted the goalpost to some degree closer to the worst-case scenario, but at no point was it ever that we expected not to play."

"We were actually wrestling with the first-pitch time and then a new system popped up with moderate rain," he added, "and that’s obviously what eventually took us down."

Cleveland center fielder Myles Straw, who got into an angry confrontation with Yankees fans in April, tossed a football with fans in the first and second decks during the early part of the delay, as did backup outfielder Will Brennan.

The center field video board showed split screen coverage of New York City's 3-0 win over Miami in the Major League Soccer playoffs, the New York Rangers' NHL game against the Anaheim Ducks and the Denver Broncos' NFL matchup vs. the San Diego Chargers.

It was the second postponement of the series following Game 2 at Yankee Stadium getting pushed back a day last week until Friday afternoon.

Cleveland has been contending with inclement weather all season. The young Guardians were rained out nine times at home and had two more postponements on the road, one because of a COVID-19 outbreak.

The Yankees get an extra day to rest their banged-up and beleaguered bullpen.

The Yankees are missing relievers Chad Green, Scott Effross, Zack Britton, Michael King and Ron Marinaccio because of injuries, and Aroldis Chapman was left off the series roster after failing to show up for a mandatory Oct. 7 workout.

Cleveland has not used its top relievers since Friday, when All-Star closer Emmanuel Clase threw 33 pitches after Trevor Stephan tossed 21 and James Karinchak 29.

Stanton could see time in left field in Houston if the Yankees advance. He has been limited to DH and pinch hitting, and he last played the outfield on July 21, before he went on the injured list for a month with left Achilles tendinitis.

Yankees: Marinaccio (right shin) and fellow RHP Frankie Montas (right shoulder inflammation) could be available if the Yankees face Houston. Marinaccio last pitched Oct. 2 and Montas on Sept 16. ... OF Andrew Benintendi, who hasn’t played since Sept. 2, had an injection for his right wrist and probably would not be available against the Astros.