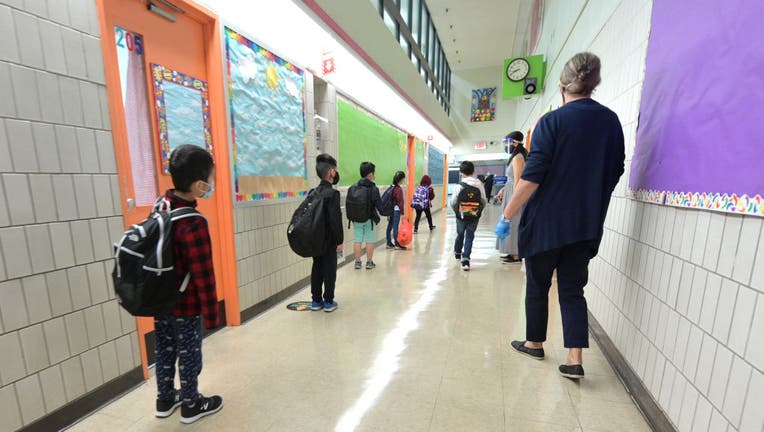 Students line up before walking into class on a day of in person at Yung Wing School P.S. 124 in New York City. (Photo by Michael Loccisano/Getty Images)

ALBANY, N.Y. (AP) - Schools across New York have reported that at least 1,200 students, teachers and staff have tested positive for the coronavirus since the start of the academic year, Gov. Andrew Cuomo said Thursday, though that number is almost certain to be an undercount.

As of Tuesday, 693 public and private schools across the state had reported at least one infection since classes began to resume in early September. Schools reported that over 700 students and 400 school staff had tested positive for the virus.

No information was available on whether the sick students had any opportunity to infect other members of their school community, or whether they had even returned to in-person learning before they tested positive.

State officials noted that the count, made public by the state through its online COVID-19 Report Card for schools, doesn't capture the full extent of infections among either schoolchildren or teachers.

A separate, more comprehensive data collection system operated by state health officials that pulls test results straight from laboratories documented just under 2,300 infections among children aged 5 to 17 across the state between Sept. 1 and Tuesday, according to data released to The Associated Press.

That's more than triple the number of infections among school-aged children that schools have reported, a discrepancy due partly to the data covering a longer time period. New York City's schools, for example, didn't reopen, even for remote learning, until the middle of the month and there was no standard system for parents there to report illnesses to school officials until the past few days, when people began returning to in-person learning.

The state is making both sets of numbers available to the public.

“It will not always match up perfectly, because sometimes when the school district reports and when the lab reports there might be a slight lag, but the goal here really is to give parents and New Yorkers full transparency," said Gareth Rhodes, an aide to Cuomo, last week.

“If the school district isn’t reporting all the cases they should, you’ll at least have it from the labs as well. And every day we work to try to collect more and better data, and as we do that we will continue adding it to this dashboard.”

“Schools are doing the things they have to do to be able to function so they can provide in-person learning while risk of contagion is as low as it can be,” he said.

Separately, the state’s 64 colleges and universities have reported 1,739 cases among students and employees. A handful have reported clusters of hundreds of students: SUNY Oneonta switched to 100% remote learning for this fall semester after being inundated with nearly 400 COVID-19 cases.