The Daniel Patrick Moynihan Train Hall at Penn Station opened to the public on Jan. 1, 2021.

NEW YORK (AP) - Gov. Andrew Cuomo and transit officials cut the ribbon Wednesday on a gleaming new train hub that will give travelers an alternative to cramped, dingy Penn Station across the street.

The Moynihan Train Hall takes up 255,000 square feet (23,690 square meters) of what formerly served as a mail sorting and loading area in the James A. Farley Post Office building, once New York’s main postal center from the early 20th century. The hall opened for public use on Friday, Jan. 1, 2021.

Amtrak and the Long Island Rail Road will use the new hall, which connects to Penn Station under Eighth Avenue to the east and provides access from Ninth Avenue to the west and to the Eighth Avenue subway. It's named after late New York Sen. Daniel Patrick Moynihan, a public transit advocate who pushed for the project in the 1990s.

In contrast to Penn Station's subterranean network of claustrophobic, windowless hallways and concourses, the new train hall is spacious and illuminated by a 92-foot-high skylight featuring more than an acre of glass.

At Wednesday's ribbon-cutting, Cuomo called the $1.6 billion project "a work of art" and an extraordinary accomplishment given that its construction finished on time despite the COVID-19 pandemic.

One of the nation's busiest train hubs just got a badly needed facelift, as Gov. Andrew Cuomo and transit officials unveiled the new Moynihan Train Hall at Penn Station.

"It won't be a trauma and nightmare to go in and out of New York City," Moynihan's daughter, Maura, said. "This is gracious and elegant and civilized, and our city needs it very badly."

The rest of the building has been turned into a commercial/retail center. In August, Facebook announced it was leasing more than 700,000 square feet there.

Cuomo and others credited Democratic Sen. Chuck Schumer, whose Senate tenure began as Moynihan's was ending in the late 1990s, for securing federal funding for the project.

In an email, Schumer called Moynihan "a relentless advocate" for the project and called the new hall "a grand, skylit, modern transit portal for LIRR and Amtrak riders that will leave the Penn Station of the past in the dust." 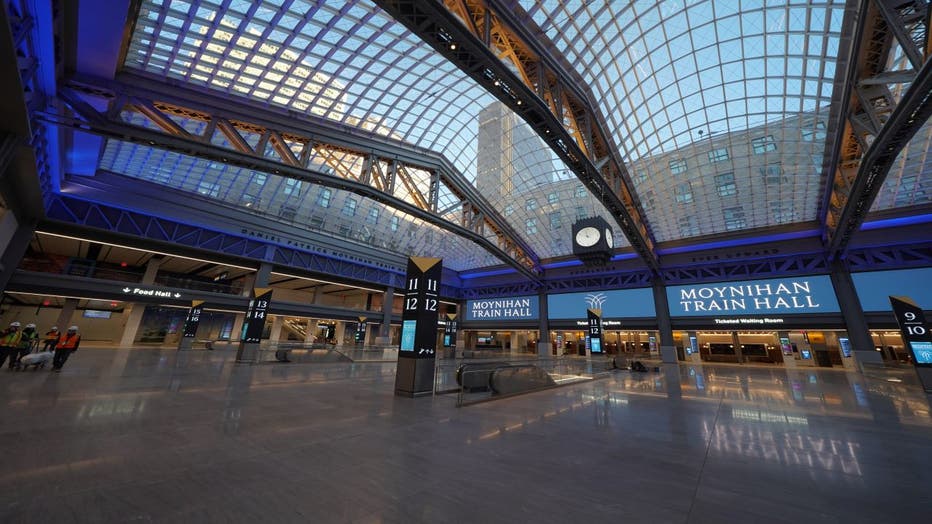 A view of the interior of the new Moynihan Train Hall. (via @governorandrewcuomo on flickr)