BLANCHESTER, Ohio - Residents in a nursing home in Ohio went on a whimsical "deer hunt" for the holidays.

To bring their senior residents some holiday cheer, nursing staff at the Continental Manor nursing home in Blanchester, Ohio dressed as reindeer and dodged soft toy arrows as residents attempted to shoot them.

In the video, senior residents can be heard laughing as they showcased their crack shot abilities.

One of the "reindeer" who was hit playfully fell to the ground with her feet in the air as a sign of surrender. 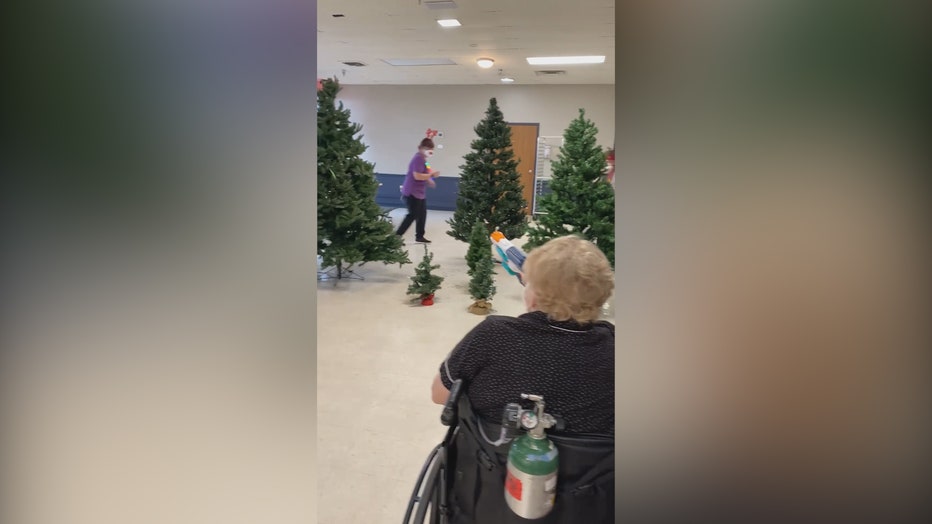 Despite a grim year marked by death and loneliness, the holiday spirit is descending on other nursing homes around the world as well.

The Zanchi nursing home, one of the first in Italy to shut its doors to visitors after a COVID-19 case was confirmed in the nearby hospital on Feb. 23, received calls from "grandchildren" whom they had never met.

The bearers of glad tidings were the so-called "grandchildren of Santa Claus," people who answered a charity’s call to spread cheer to elderly nursing home residents, many of whom live far from their families or don’t have any family members left.

The "Santa’s grandchildren" program is in its third year. Last year, it matched 2,550 "grandchildren" with residents of 91 nursing homes. This year, 5,800 gifts were dispatched to 228 nursing homes around the country -- an outpouring that is, in part, a reaction to the devastating toll that the coronavirus has had on the elderly, comprising the majority of Italy’s confirmed 70,000 COVID-19 dead.

Storyful and the Associated Press contributed to this report.