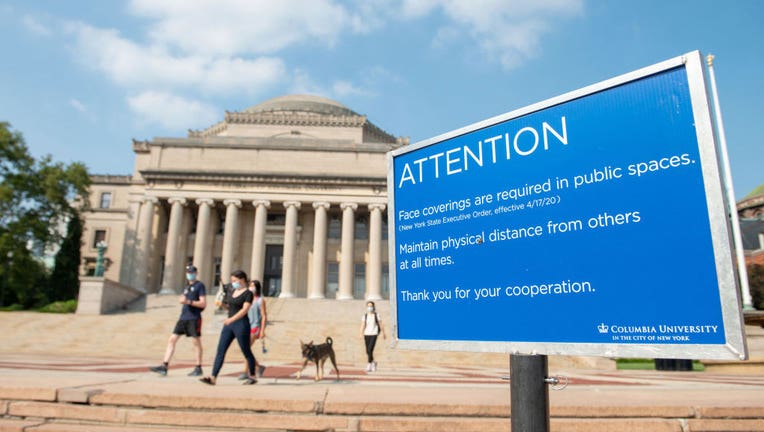 NEW YORK - As they struggle to salvage some semblance of a campus experience this fall, U.S. colleges are requiring promises from students to help contain the coronavirus — no keg parties, no long road trips and no outside guests on campus.

No kidding. Administrators warn that failure to wear masks, practice social distancing and avoid mass gatherings could bring serious consequences, including getting booted from school.

Critics question whether it's realistic to demand that college students not act like typical college students. But the push illustrates the high stakes for universities planning to welcome at least some students back. Wide-scale COVID-19 testing, quarantines and plexiglass barriers in classrooms won’t work if too many students misbehave.

“I think that the majority of students are going to be really respectful and wear their masks, social distance, keep gatherings small,” said incoming Tulane University senior Sanjali De Silva. “But I fear that there will be a distinct group of students that will decide not to do that. And it’ll be a big bummer.”

Tulane students have already received a stark warning from the school in New Orleans, an early pandemic hot spot. After a summer weekend of large gatherings, Dean of Students Erica Woodley wrote to students, stressing her key point in bold, capital letters.

“DO NOT HOST PARTIES OR GATHERINGS WITH MORE THAN 15 PEOPLE, INCLUDING THE HOST. IF YOU DO, YOU WILL FACE SUSPENSION OR EXPULSION FROM THE UNIVERSITY,” Woodley wrote, signing off with, “Do you really want to be the reason that Tulane and New Orleans have to shut down again?”

The emphasis on student behavior is part of a broader effort to create safe bubbles on campus even if the virus surges elsewhere. The University of Texas at Austin is not allowing parties either on or off campus. In Massachusetts, Amherst College is prohibiting students from traveling off campus except in certain cases, such as medical appointments and family emergencies.

Many universities have spelled out expectations for student behavior in pledges and compacts that cover everything from mask wearing to off-campus travel. The pledges often cover faculty and staff, too.

It’s unclear how well these rules will work. Critics say the very nature of the college experience — with cramped housing and intense social activity — works against success. Some colleges are already backing off plans for in-person classes this fall.

“The majority of kids who go to college are civic-minded, responsible people. They’re also young,” said Scott Galloway, professor of marketing at New York University. “If some of them don’t comply, it’s a problem. And I think some to many will have a difficult time ignoring every instinct pulsing through their body at that age that they’re supposed to socialize and find mates.”

Galloway plans to teach online this fall and return to campus when there’s a vaccine.

“After weeks of developing a very elaborate plan for a hybrid model in the fall," officials decided "it was just too risky to teach face-to-face,” Chancellor Carol Christ said during a virtual event hosted by the Chronicle of Higher Education.

The pledges apply the advice public health officials have been giving since March for college settings. Yale's compact includes a commitment to remain in Connecticut during the fall semester through Nov. 21 and a promise not to “invite or host non-Yale-affiliated individuals” on campus without permission. Ohio State University's “Together As Buckeyes Pledge ” includes a promise to conduct daily health checks.

“We want to be clear: Our return to on-campus operations in the autumn is fully dependent on each member of the university community following all requirements and guidance,” read a July 24 letter from Ohio State officials.

Cornell University students must agree not to organize, host or attend events that may cause “safety risks” to people, under a school compact released this week. University of Pennsylvania students are warned in the school's compact that alcohol and drugs are not an excuse for risky COVID-19-related behavior. Syracuse University’s pledge includes commitments to get a flu shot and to avoid going to social gatherings with more than 25 people.

“I think that people will really keep each other in check. I know I will,” said Suhail Kumar, an incoming Syracuse sophomore. “If I see my roommates unmasked or not following protocol, I’m definitely going to let them know because I don’t want to jeopardize anything for myself.”

Failure to comply with the pledges will be treated as a disciplinary violation.

Syracuse students can face “serious consequences” for violating COVID-19 guidance, and students who host large parties could face sanctions up to suspension and expulsion, according to the school's web site.

At Penn, incoming senior Ben Zhao is optimistic the new rules will be followed.

Zhao, who is from the Chicago suburb of Northbrook, Illinois, is looking forward to being back on campus after an interrupted spring semester, even with the prospect of online classes. He misses his friends, the school newspaper, where he is executive editor, and studying with classmates.

"They’re all big things that I don’t want to necessarily miss out on for my senior year,” he said.