Nicole Kidman, her husband Keith Urban and Chris Hemsworth were among dozens of celebrities who have donated to relief funds connected to the devastating Australia wildfires.

LOS ANGELES - As the bushfires continue to leave a trail of devastation all over Australia, celebrities stepped in to help with donations and urged their fans to do the same.

The wildfires, which have charred an area twice the size of Maryland, stretch across Australia’s southeast quadrant. That area is the most densely populated portion of the country, and the blazes have killed at least 24 people. Nearly 2,000 homes have been destroyed.

Dozens of celebrities who are originally from Australia spoke up about the devastation during Sunday’s Golden Globes. Many have also taken to social media to talk about their donations and how fans can pitch in.

On Tuesday, Chris Hemsworth announced on his Instagram that he and his family were donating $1 million to relief efforts. He also provided a list of places where his followers could contribute.

Russell Crowe, who won an award for his performance in “The Loudest Voice,” did not attend the ceremony, but provided a speech that focused on the catastrophic fires. Jennifer Aniston, who presented the award alongside Reese Witherspoon, read his speech on his behalf.

“Make no mistake, the tragedy unfolding in Australia is climate-change based. We need to act based on science, move our global workforce to renewable energy and respect our planet for the unique and amazing place it is – that way we all have a future,” Crowe’s speech said.

Crowe donated $105,000 to Australia’s Rural Fire Service and provided updates on the fires on his Instagram account.

Nicole Kidman and her husband Keith Urban donated $500,000 to the RFS.

“Our family’s support, thoughts, and prayers are with everyone affected by the fires all over Australia,” Urban said on his Instagram account.

Margot Robbie urged fans to help out in an Instagram post where she showed photos of herself and her family growing up on a farm in the country.

“I’m sure you’re all aware of what’s happening in Australia at the moment with the fires, and I didn’t want to show you more pictures of the devastation. I wanted you to see how beautiful our country is because it is so beautiful and it is really, really hurting right now and it really, really needs you to please, please donate anything you can,” she said.

She said she’d made donations to several different organizations and provided links to them.

Rebel Wilson attended the 2020 Pacific Fair Magic Millions Polo on Sunday and auctioned off two lunches with her to raise $100,000 for a relief fund.

Stone went on to criticize Australian Prime Minister Scott Morrison, stating he had done “absolutely nothing.” Morrison has faced similar complaints from the Australian public, politicians and local publications — many claiming he’s been slow to act.

On Saturday, Morrison said he would dispatch 3,000 army, navy and air force reservists to help fight the fires and committed 20 million Australian dollars ($14 million) to lease fire-fighting aircraft from overseas.

American Nick Kroll shared a video on Twitter and linked to the RFS. He said he and Australian Joel Edgerton were working to raise money to “combat the terrible fires raging through (the) country.”

Other non-Australian celebrities pitched in what they could, too.

Kacey Musgraves donated to relief funds after she asked fans how she could help.

Ellen DeGeneres also contributed an undisclosed amount and shared links to the RFS, Red Cross in Australia and Wires, a wildlife rescue organization.

Selena Gomez and Paris Hilton provided donations, while Hilary Duff said she and her husband Matthew Koma were coming up with a number they “feel comfortable with to donate.”

Phoebe Waller-Bridge, who won Golden Globes for her show “Fleabag,” said during a Q&A backstage on Sunday that she will be auctioning off her custom-made suit from the awards ceremony.

“We’ve hatched an amazing plan with Ralph & Russo who are Australian designers who created this incredible couture suit, which is the most extraordinary thing I think I’ve ever worn. We’re going to auction it and the money that is raised from it will go toward relief in Australia. I think it’s a beautiful idea from the team,” she said.

On Sunday, cooler temperatures and lighter winds brought some relief to threatened communities, a day after thousands were forced to flee as flames reached the suburban fringes of Sydney. 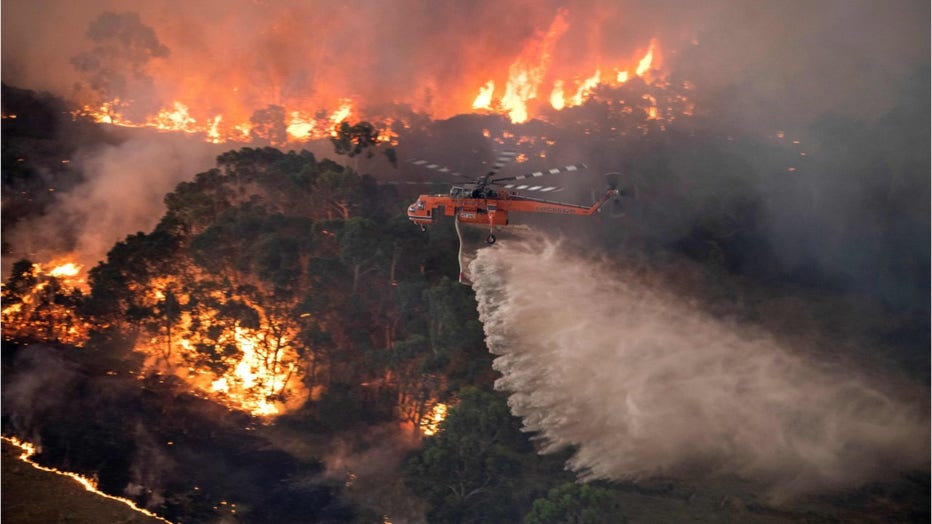 Thousands of firefighters fought to contain the blazes, but many fires continued to burn out of control, threatening to wipe out rural townships and causing almost incalculable damage to property and wildlife.