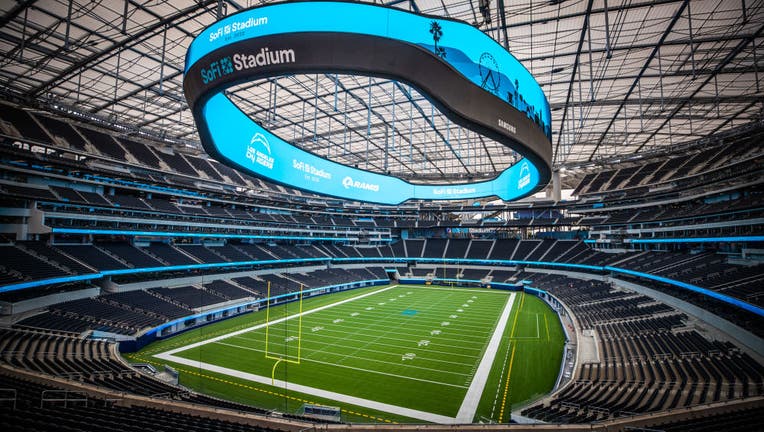 FILE - The interior of SoFi Stadium is seen following a ribbon-cutting event on Sept. 8, 2020 in Inglewood, California.

The National Football League announced on Sept. 12 that they will be closely monitoring the air quality in Inglewood, California as wildfires continue to pose potential health risks to players, according to an NFL news release.

NFL officials, along with the Los Angeles Rams, said that the air quality could impact the start time of Sunday night’s season opener between the Rams and the Dallas Cowboys.

The "Sunday Night Football" game is scheduled for an 8:20 p.m. ET kickoff.

“Should there be a sustained poor air-quality level of 200 or above the game could be affected,” the news release stated. “Per the Air Quality Index, an unhealthy air-quality level score is between 151-200. If the game needs to be delayed, options are moving it to later in the week or relocating. That decision would come from the league.”

The San Francisco 49ers practiced Friday at their facility as scheduled, even with an AQI that was between 150 and 200. NFL rules call for postponing or moving a game if the AQI is expected to remain consistently above 200 at the stadium on the day of the game.

“If it gets to 200, that’s when the NFL will start really discussing what to do with the game,” Shanahan said. “I don’t think that’s my decision at all. I know it’s not, thank goodness. We’ll see what happens. Hopefully, it won’t get there. Hopefully, it will be safe, but got to see what the wind does.”

This isn’t the first time in recent years that the Niners have had to keep a close eye on the air quality. The 49ers and Raiders played home games in smoky air in 2018 that didn’t reach the 200 AQI threshold.

Conditions got worse the following week, leading to the postponement of the Big Game between Stanford and California but the Niners were off that weekend and the Raiders were on the road.

The NFL has moved a game because of fires before, relocating a 2003 Monday night game between the Chargers and Miami from San Diego to Arizona.

“I never knew what a AQI index was. I never really got into that before,” fullback Kyle Juszczyk said. “That’s been something very interesting that we’ve had to deal with out here. But the thing about it is, you really can’t get too concerned about it because there’s literally nothing you can do for it. There’s nothing that we can do to help lower that number or to change it."

The fires have been an issue for much of the summer for the 49ers, who have frequently had to practice in smoky conditions. There was an orange glow in the sky Wednesday and the air quality has gotten worse the past two days but the team hasn’t missed any practice.“It’s everywhere right now,” linebacker Kwon Alexander said. “It’s orange out here. It’s weird. Everything has been weird in 2020.”