A 4-month-old baby boy is expected to recover after being found left in a wooded area in Orion Township Wednesday morning.

LAKE ORION, Mich. (FOX 2) - The Oakland County Sheriff's Office said a 4-month-oldy boy was found abandoned in the woods Wednesday and has been taken to the hospital to be evaluated.

According to the sheriff's office, the baby was found in the woods in Lake Orion on Wednesday near the intersection of Joslyn and Waldon, which is about 2 miles west of US 24 and 3 miles north of I-75.

In a press release from the sheriff's office, deputies were originally called by two people who said a woman was hiding in the bushes in the area and had been ringing doorbells. When deputies arrived, the woman was gone but staff from Waldon Middle School reported a frantic woman had been pounding on the locked doors of the school.

The woman, a 37-year-old from Orion Township, gave information to the deputies that they didn't believe was true. Ultimately, they learned she had an infant son and noticed she had burrs in her pants indicating she had been in the woods.

Deputies determined the baby was missing and then were able to figure out the best location where she may have been. Then they started searching a one-mile grid between her home, the school, and the neighbors who called 911.

Around 8:30 Wednesday morning, 30 minutes after learning the baby was missing, deputies found him in the woods, cold and wet but breathing.

The baby was face down near Orion Township creek and was hypothermic. 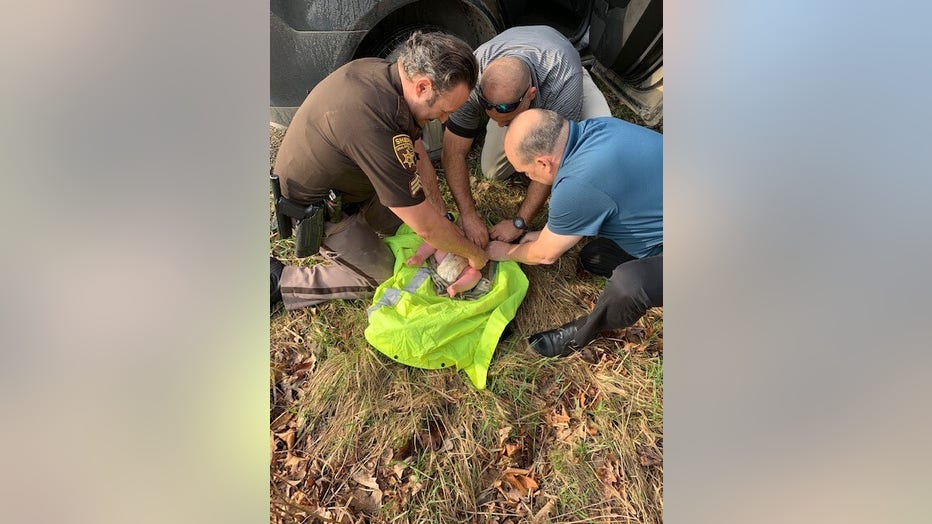 Deputies said the boy was in a wet sleeper and was wrapped in warm blankets before being taken to the hospital for treatment and observation. The child is expected to be kept overnight and is in the care of Child Protective Services.

"Thankfully, deputies were able to determine a baby was missing, which triggered an immediate large response and search, and they were able locate the child," Sheriff Michael Bouchard said. "Their quick work avoided what could have been an unspeakable tragedy."

Deputies believe this may be a case of prescription drug abuse and a warrant is being sought for her arrest on suspected child abuse.

Michigan has a Safe Haven Law that allows parents to surrender a newborn within 72 hours of birth to an emergency medical service provider. That means an employee on duty at any fire department, hospital, or police station.

April is Child Abuse Awareness month and, in Michigan, over 33,000 children are victims of abuse and neglect every year. For more information on Child Abuse Prevention month, please visit www.michigan.gov/preventchildabuse.

A previous version of this story stated that the baby was a newborn. The press release from the Sheriff's Office indicates the baby was 4-months-old.