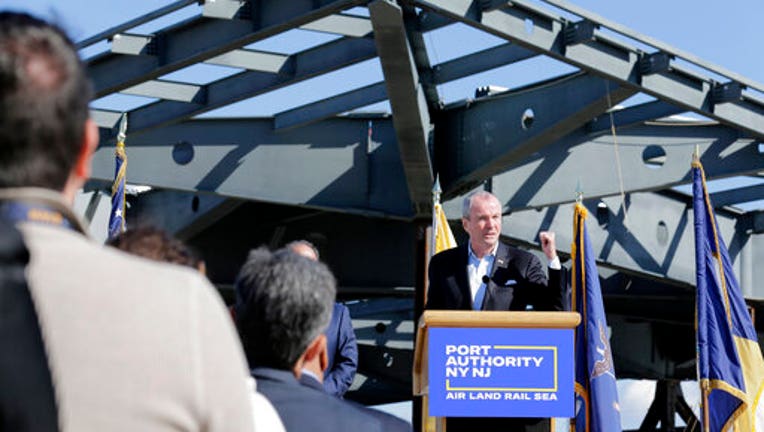 New Jersey Gov. Phil Murphy speaks at a ceremony in front of the new Terminal 1 at Newark Liberty International Airport in Newark, N.J., Wednesday, Oct. 23, 2019. A $2.7 billion project to replace one of the airport's three terminals has passed a mil

NEWARK, N.J. (AP) — A $2.7 billion project to replace one of Newark Liberty International Airport's three terminals passed a milestone Wednesday as it moves slowly toward what officials hope is a makeover of an airport that consistently ranks near the bottom of surveys on passenger satisfaction and on-time performance.

Steelworkers raised the final steel beam for the exterior of the new Terminal 1. New Jersey Gov. Phil Murphy, the leaders of both of New Jersey's legislative bodies and officials from the Port Authority of New York and New Jersey, the airport's operator, signed the beam before a crane hoisted it into place.

Terminal 1 will replace the overcrowded Terminal A, long considered the airport's ugly duckling.

By the Port Authority's own assessment, Terminal A suffers from unacceptable congestion, undersized waiting areas and insufficient numbers of bathrooms and concession areas.

"You're pushing 45 million passengers annually through a facility that was designed for probably half that," Catherine Cronin, the Port Authority's program director for aviation, said Wednesday. "So people are constantly overcrowded and nervous that they're not going to make their flights. The new terminal will have more space and the ease of coming through it will be better."

The new terminal will be roughly 1 million square feet, Cronin said, compared to the current terminal's approximately 650,000 square feet. Many of the gates will open in 2021, while the remaining ones will open the following year.

The Port Authority also is overseeing other multibillion-dollar redevelopment projects in the New York area at LaGuardia and JFK airports, and is pushing ahead with plans to build a rail link from midtown Manhattan to LaGuardia and replace Newark's AirTrain monorail.