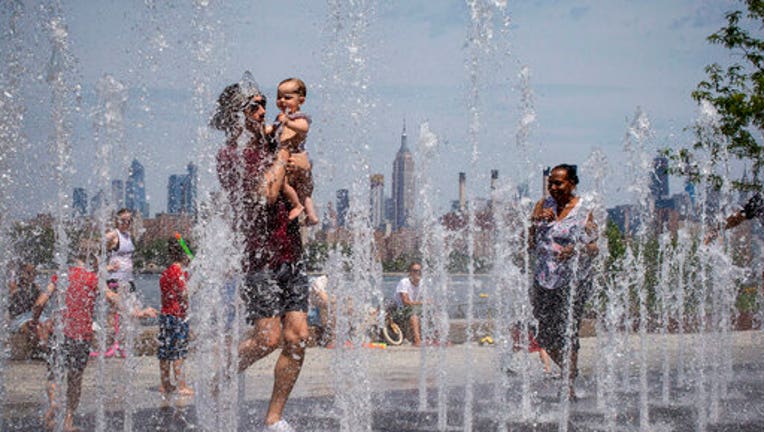 FILE - This photo from Saturday July 20, 2019, shows people playing in a water fountain at the Empire State Building in the Williamsburg section of Brooklyn, N.Y. State regulators have been working to require public water systems to test for and clea

ALBANY, N.Y. (AP) — It's unclear just when New York will move ahead with ambitious plans that were announced last year to test public water systems for three industrial chemicals.

State regulators have been working to require public water systems to test for and clean up three contaminants linked with long-term health risks such as severe kidney and liver damage.

New York is poised to join a handful of Northeast states that — frustrated with a lack of federal standards — are moving forward with their own drinking water limits for industrial chemicals found in paint strippers, stain resistant clothing, nonstick products and firefighting foams. New York would become the first state to set a limit for 1,4-dioxane, a synthetic chemical found in inks, adhesives and household products such as shampoos that's considered likely to cause cancer in humans.

The state's largest water suppliers have already begun testing and treating their water for the chemicals. But it's unclear just when all New Yorkers will know whether their drinking water has elevated levels of such pollutants.

That leaves customers of smaller systems in the dark in a state still facing the legacy of water pollution crises in upstate communities including Hoosick Falls and Newburgh.

"Health has to come first, the money, the budgets, all of that can get worked out," Loreen Hackett, a resident of Hoosick Falls, told regulators at a recent Drinking Water Quality Council meeting.

WHAT'S THE HOLD UP?

Environmental groups are calling on health officials to act swiftly so the public can know whether they're drinking water is safe. They say while New York has dragged its feet, other states including Michigan are proposing stricter rules for more industrial chemicals.

"When you know that human lives are on the line, we can't understand why it's taken so long," said Maureen Cunningham, of the Environmental Advocates of New York. She said officials have also failed to come up with a list of more emerging contaminants called for in a 2017 law.

But water suppliers worried about being held liable for contaminated water have threatened to shut down wells, impose water restrictions or prevent new customers from hooking up. Suppliers, particularly in areas of Long Island already known to have high levels of industrial contaminants, have called for a delay of three years to install treatment systems expected to cost $1.4 billion to install.

"Water suppliers have been clear that they will not supply water that doesn't meet all drinking water regulations," said Stanley Carey, superintendent at Massapequa Water District and member of New York's Drinking Water Quality Council. "They just will not do that. If that means drastic conservation measures. If that means no new water hookups."

Agency officials rejected an effort by water suppliers to delay roll-out at a state Drinking Water Quality Council meeting last month, and said they'll work with water suppliers on a case-by-case basis to come up with plans to ensure compliance. But officials said they're still going through over 4,000 public comments from residents, water suppliers, environmental and public health groups and chemical companies.

Officials hope to hold another public meeting in December and the state could roll-out the limits as early as March, according to Brad Hutton, deputy commissioner for New York's Office of Public Health. But that could change if regulators tweak their plans on public comments, he added.

WILL POLLUTERS PAY UP?

Dow Chemical Company is a major manufacturer of 1,4-dioxane but a spokeswoman said the company hasn't manufactured or disposed the chemical on Long Island. Vulcan Materials Company declined comment, while Ferro Corporation didn't respond to request for comment.

"Like thousands of others, Dow provided public comments to the state of New York," the company said in a statement. "The comments were submitted jointly with other similarly situated companies and demonstrate that the proposed maximum contaminant level for dioxane was the result of a flawed process and is not based on the best and most recent science."

The EPA classifies 1,4-dioxane as likely cancer-causing, a warning echoed by the International Agency for Research on Cancer. A handful of Long Island municipalities are piloting new technology to remove the hard-to-clean-up contaminant.

Carey, of the Massapequa Water District, said money's a concern but water districts will figure out how to fund needed technology — whether through borrowing money, receiving grants or going after polluters.

Such infrastructure costs are expected to top $40 billion over the next two decades, he added.