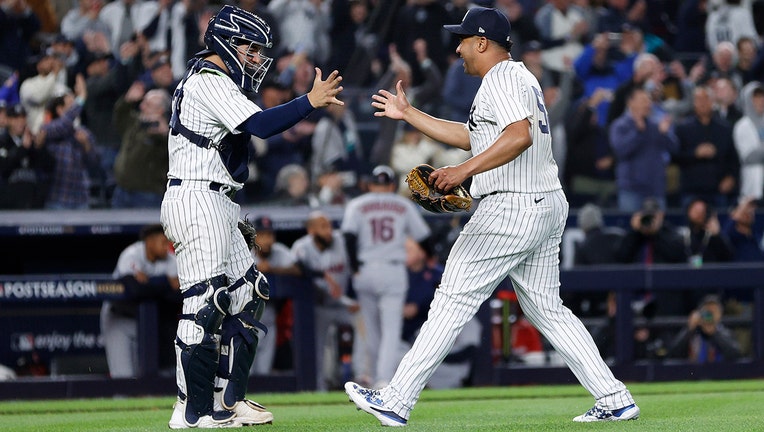 NEW YORK - The New York Yankees are taking on the Houston Astros in the American League Championship Series, which begins Wednesday, Oct. 19, 2022.

The Yankees beat the Cleveland Guardians in the ALDS 3 games to 2.

The Bronx Bombers finished the 2022 regular season with a 99–63 record and the American League East title, earning them a bye in the first round of the reformulated MLB postseason.

The Yankees are focusing on winning the club's 28th World Series title. The Yankees' last trophy came in 2009 against the Philadelphia Phillies.

Who Made the Yankees' ALCS Roster?

Right-hander Frankie Montas, who missed the ALDS with a shoulder injury, was added to the ALCS roster. Left-hander Lucas Luetge, who did not pitch in the ALDS, was kept off the roster to make room.

Outfielder Aaron Hicks was off the roster. Hicks suffered a season-ending left knee injury when he and shortstop Oswaldo Cabrera collided in Game 5 of the ALDS.

Marwin Gonzalez, who went 0 for 1 with a strikeout in the ALDS, was also dropped.

Several players who weren't on the ALDS roster remain out for the ALCS, including former closer Aroldis Chapman, who missed a mandatory team workout on Oct. 7 and was then told to stay away from the team.

Here is the full roster rundown:

Where Are the Yankees Seeded?

By winning the AL East and having the second-best record (99–63) among division winners, the Yankees are the No. 2 seed in the playoffs. They had a first-round bye and advanced directly to the AL Division Series, for which they had home-field advantage.

However, Houston went 106–56 in the regular season and won the AL West, making them the No. 1 seed in the AL. So the Astros have home-field advantage in the ALCS.

What Is the ALCS Schedule?

The ALCS is a best-of-seven series. All times Eastern.

Where to Watch and Listen to the ALCS

This year, the NLCS is airing on either FOX 5 or Fox Sports 1 (FS1) and the World Series will air on FOX 5.