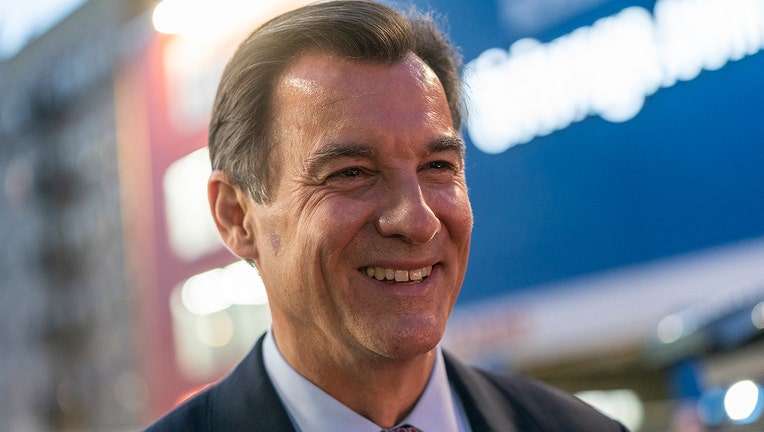 U. S. Representative Tom Suozzi is seen outside of National Action Network. (Photo by Lev Radin/Pacific Press/LightRocket via Getty Images)

NEW YORK - New York Democrat Rep. Tom Suozzi is looking to potentially introduce a one-time wealth tax after it was recently reported that some of the country’s wealthiest people have escaped paying federal income taxes.

Suozzi, who is a member of the House Ways and Means Committee, told The Hill in an interview that his proposal would be a 2.5% surcharge on wealth between $50 million and $100 million, increasing to 5% on wealth above $100 million. The one-time obligations, which he calls a "patriot tax," would be payable over the course of five years.

The Democrat’s office told the publication that the measure could raise $450 billion.

A spokesperson for Suozzi’s office did not return FOX Business’ request for comment.

Several other progressive Democrats have previously unveiled wealth tax proposals, including Senators Elizabeth Warren, D-Mass, and Bernie Sanders, I-Vt. Both of their plans, however, include annual surcharges on wealth.

As opposed to taxes levied on income and payrolls, a wealth tax would target the value of accumulated assets owned by rich Americans – or their net worth. The idea, generally, is to combat growing economic inequality, creating a more level playing field among the wealthy and middle classes by adjusting the tax system.

Last week, ProPublica reported that some of the world’s richest individuals have managed to pay little to nothing in federal income taxes in recent years.

President Biden has not endorsed proposals for a wealth tax. He is, however, contemplating other types of tax hikes as a means to secure funding for two significant spending proposals, including one that would revamp the nation’s infrastructure.

Suozzi is among a number of lawmakers representing high-tax states that have pushed for a repeal of the $10,000 SALT cap, implemented as part of the 2017 Tax Cuts and Jobs Act. The cap was perceived as having a negative effect on residents in blue states – like New York and New Jersey – where income and property taxes are higher.

Earlier this year, Suozzi said he would not support any of Biden’s tax increases unless the SALT cap was also repealed.

Repealing the SALT cap would cost the federal government revenue.

Republicans have characterized the effort to repeal the cap as a tax cut for the wealthy. An analysis conducted by the Tax Foundation estimates its repeal would cost $600 billion in revenue over the course of a decade, with the largest relief aimed at the top 1% of earners.

Suozzi, who represents parts of Long Island and Queens, has also taken to his Twitter account throughout recent weeks to discuss the tax gap, which a tax official said last week is likely to hit $7 trillion over the next 10 years.