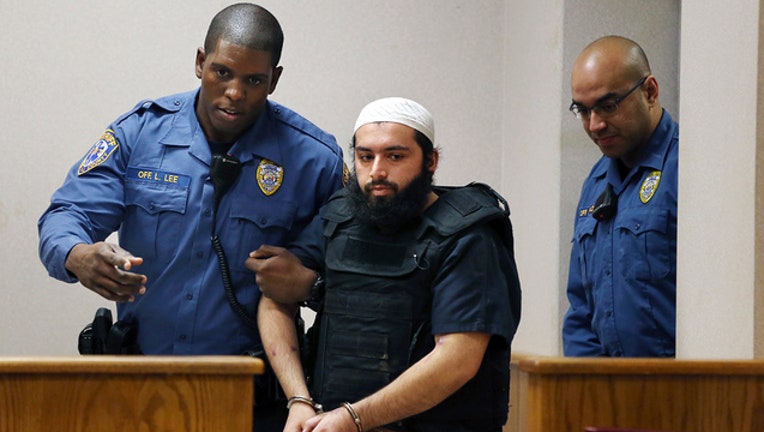 ELIZABETH, N.J. (AP) — An Islamic terrorist already serving a life prison term for a bombing in New York City has been convicted of multiple counts of attempted murder and assault stemming from a shootout with police three years ago.

Ahmad Khan Rahimi , a U.S. citizen who was born in Afghanistan but grew up in New Jersey, sat quietly during the reading of the verdicts Tuesday.

The New Jersey jury deliberated over parts of two days before convicting Rahimi on all 30 counts related to his 2016 gunfight with police in Linden, rejecting his attorney's argument that he acted in self-defense.

Rahimi was previously convicted in a separate trial of planting two bombs in New York City's Chelsea neighborhood in summer 2016, one of which detonated with enough force to hurl a 100-pound trash bin more than 120 feet, shatter windows and leave metal scraps strewn on the street.

No one was killed, but 30 people suffered injuries, including cuts caused by flying metal and glass. A second bomb planted on the street failed to explode.

The bombing came just hours after a small pipe bomb detonated harmlessly along the route of a Marine Corps charity road race in Seaside Park, New Jersey. Authorities have also charged Rahimi in that attack.

Investigators identified Rahimi as a suspect through a mobile phone attached to the Manhattan bomb that didn't detonate.

As authorities hunted for him, they discovered a backpack containing additional explosives near a New Jersey transit station in Elizabeth, New Jersey.

When an officer found Rahimi sleeping in a doorway on Sept. 19, 2016, he pulled a gun and started shooting. The gun battle ended when Rahimi was shot and seriously wounded.

Rahimi still faces a six-count federal criminal complaint in New Jersey charging him with detonating the bomb at the charity road race and with placing the bomb-filled backpack near the train station.

Rahimi graduated from high school in the area in 2007 and later attended community college, where he majored in criminal justice but didn't graduate. His family operated a chicken takeout restaurant in Elizabeth not far from the courthouse where he was tried.

After his arrest, acquaintances and customers described him as reserved but friendly, though one said Rahimi had returned from a trip to Afghanistan several years earlier "more religious" and dressing differently.

At Rahimi's sentencing in New York last year, prosecutors criticized him for not showing remorse and for seeking to radicalize fellow prisoners at the federal jail in New York where he had been imprisoned since his arrest.

They maintained he gave inmates copies of terrorist propaganda and jihadist materials, including speeches and lectures by al-Qaida founder Osama bin Laden and Anwar al-Awlaki, a U.S.-born cleric who inspired attacks on America and was killed in a U.S. airstrike in September 2011.