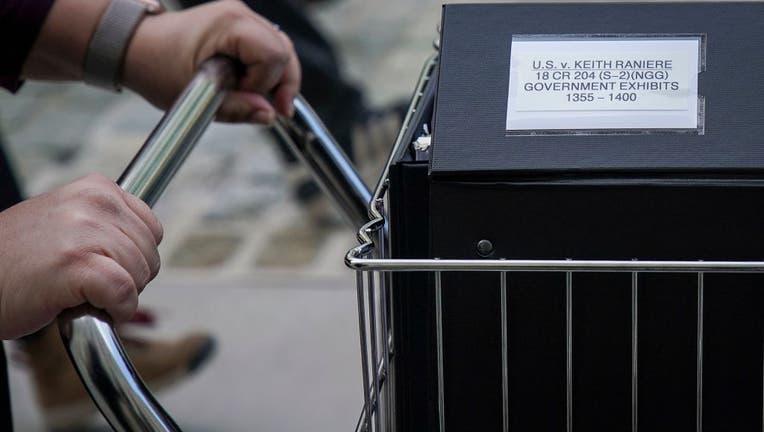 NEW YORK, NY - MAY 7: Staff and members of the prosecution team push carts full of court documents related to the U.S. v. Keith Raniere case as they arrive at the U.S. District Court for the Eastern District of New York a, May 7, 2019 in the Brooklyn

Raniere is not entitled to a new trial on the charges of sex trafficking and coercing women into sex he was convicted of last year, Judge Nicholas Garaufis of Brooklyn federal court ruled Friday.

Prosecutors said that as the leader of a cult-like group called NXIVM, Raniere used blackmail and punishment to turn his female victims into sex slaves.

Witnesses testified that Raniere’s “slaves” were forced to provide nude photos as “collateral” to keep them in line.

He demanded a new trial in March, arguing that witnesses including two of his victims lied about their plans to sue him civilly.

Garaufis said Raniere is not entitled to a new trial because he did not prove that any of the testimony was actually false.

“Assuming for present purposes that Daniela and Nicole are, in fact, among the Jane Doe plaintiffs in that action (which appears to be the case), this hardly proves that either of them had determined to join that action when they testified at trial more than six months before it was filed,” the judge wrote.