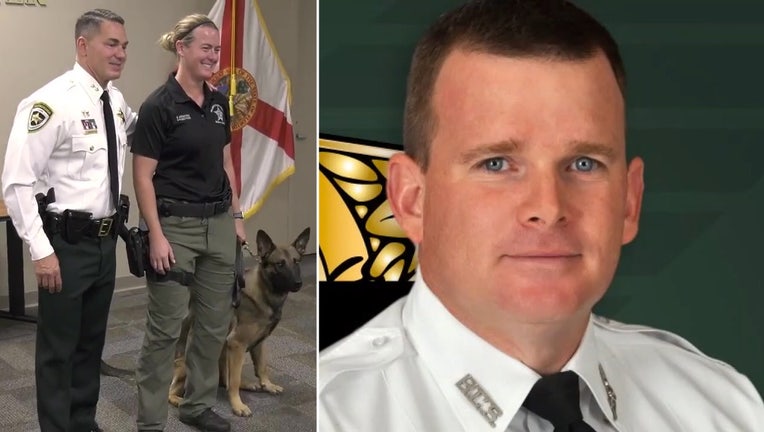 TAMPA, Fla. - The Hillsborough County Sheriff's Office is welcoming a new K9, who is named after one of its sergeants killed in the line of duty last year.

"My dad was tough as nails, just like the dogs are, so it's nice to know he's kind of still out here with us," said Deputy Caitlin LaVigne, the late sergeant's daughter, who also works for the Hillsborough County Sheriff's Office.

According to the agency, K9 Roy's handler is Deputy Sarah Ernstes, a close family friend of the LaVignes.

"I just hope that Roy and I can honor them and honor him in some way that they'll be proud of us," Ernstes said.

K9 Roy is a 1-year-old Belgian Malinois and German Shepherd mix, who specializes in searching for narcotics.

Community mourns with family of corporal killed just before retirement

A Hillsborough County deputy, a 31-year veteran on the force, was one shift away from retiring when he was killed in the line of duty.

"This tribute to Sergeant Brian LaVigne is one that will be ever-present among those who come into contact with K9 Roy," Sheriff Chad Chronister said in a statement. "While we continue to heal as an agency after losing Sergeant LaVigne last year, I know that K9 Roy will be a constant reminder of the legacy he left behind when his life was cruelly taken from us."

LaVigne was a 31-year veteran of the sheriff's office and just one shift away from retirement on Jan. 11, 2021 when a suspect fleeing from deputies intentionally rammed his car into the sergeant's patrol vehicle.

PREVIOUS: Community mourns loss of Hillsborough deputy – one shift away from retirement – who was killed on-duty

The 54-year-old sergeant was trapped in his cruiser after the crash, and later died as a result of his injuries.

Lavigne is survived by his wife and two daughters.

In his statement announcing K9 Roy's naming, Chronister said, "It is an honor that the LaVigne family has allowed us to use his name to always remember the loving man, husband, father and friend Sergeant LaVigne was to us all."