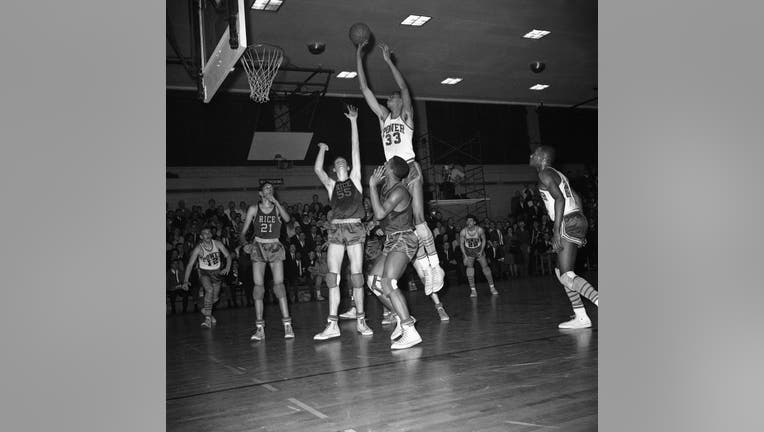 NEW YORK - Kareem Abdul-Jabbar smiled as he rattled off the names of his former high school teammates and opponents.

The Hall of Fame center was intently watching video of one of his New York high school championships when he starred for Power Memorial Academy 55 years ago. He was known as Lew Alcindor back then, when he dominated the city before heading to UCLA.

The video was part of a new exhibit at the Museum of the City of New York that chronicles some of New York's greatest basketball players and moments — City/Game.

“I will always enjoy those memories," Abdul-Jabbar said. “I remember I was still in grade school when I started to go to NBA games at Madison Square Garden and that had an effect on me."

Abdul-Jabbar spent about 15 minutes walking through the exhibit, which opens to the public Friday. Besides the video, there was also a photo of him playing in high school. He quickly pointed out former Knicks' great Dean Meminger in the picture, as well.

The NBA's all-time scoring leader was also proud to talk about his father Ferdinand, who played in high school in New York in the 1930s with legendary Knicks coach Red Holzman.

“People don't realize that my dad played in high school with Red. They were teammates in high school and I don't think Red realized that I was the son of someone he played with," Abdul-Jabbar said. “Red graduated in January. My dad said we were good until Red graduated and then forget it."

Holzman's Knicks are well represented in the exhibit, with one of Bill Bradley's warmup jerseys and the 1970 championship banner the team won that usually hangs in the Westchester training facility.

The exhibit is divided into different eras of New York basketball starting in the 1900s and going through current time. There's Kenny Anderson's high school jersey, as well as that of Sue Bird and Tina Charles. A signed Jeremy Lin Knicks jersey from the height of “Linsanity".

“Basketball’s history and development is inextricably tied to New York,” says Whitney Donhauser, the director and president of the museum. “City/Game captures the excitement and evolution of this quintessentially urban game and the energy of the diverse New Yorkers who play it and love it.”

There's also a nod to the culture and outdoor game that has made New York famous. There are over 1,800 outdoor courts in the city.

There's also items from women's basketball, including a video of Queens College and their legendary coach Lucille Kyvallos. The team played the first women's game at MSG in 1974 against Immaculata.

The museum had a gala Tuesday night, when they honored Abdul-Jabbar. Other New York basketball greats were in attendance, including Bernard King and Felipe Lopez.

King grew up in Brooklyn and starred for the Knicks in the 1980s. He went to college at Tennessee and joked that Hall of Fame St. John's coach Lou Carnesecca tried to recruit him, but King said no. Although he did get a good Italian dinner out of the deal, because, “how could you say no to an Italian meal with coach?" King recalled.

One of Carnesecca's sweaters is on display, as well as the NIT and NCAA trophies that CCNY won in 1950. They are the only school to ever win both tournaments the same year.

Museum curator Lilly Tuttle said it took about 18 months to pull this exhibit together. It runs through January.

“The exhibition is a way to celebrate the long history of basketball in New York and the legacy of talent that's come through the city," she said.