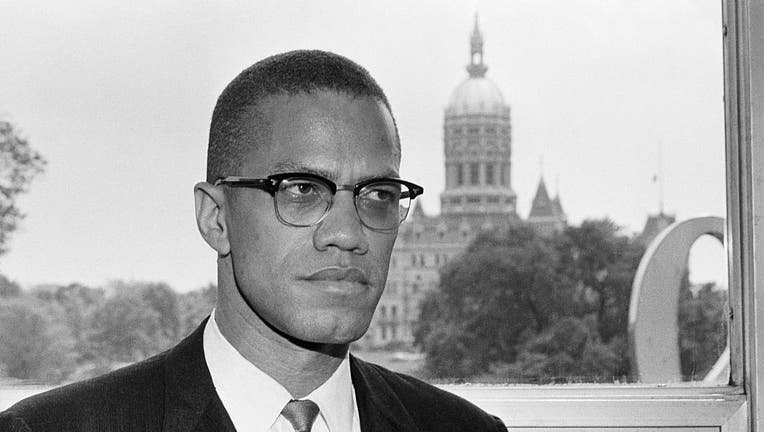 (Original Caption) 6/4/1963-Hartford, CT: Malcolm X, leading spokesman for the Black Muslim movement, is shown with the dome of the Connecticut Capitol behind him as he arrived in Hartford for a two day visit.

“Who Killed Malcolm X?” dives into questions surrounding his accused killers and allegations of a botched investigation. The show available now on the streaming service comes as Friday marked the 55th anniversary of Malcolm X's death.

The series follows activist-scholar Abdur-Rahman Muhammad, who revisits the assassination through interviews and archives. Muhammad argues in the series that at least two of the men charged with the slaying were innocent and that the real killers got away.

Three men — Muhammad Aziz, Mujahid Abdul Halim and Khalil Islam — were convicted of killing the civil rights leader and sentenced to life in prison. Aziz and Islam had long denied they were connected to any plot to kill Malcolm X, and Halim had said the two were not involved.

Manhattan District Attorney Cyrus Vance’s office announced earlier this month after the release of the series that it will revisit the 1965 assassination.

“(Vance) has determined that the district attorney’s office will begin a preliminary review of the matter, which will inform the office regarding what further investigative steps may be undertaken,” district attorney spokesman Danny Frost said in a statement.

The assassination of Malcolm X has long interested scholars and activists, who point to the feud he had with Nation of Islam leader Elijah Muhammad after publicly breaking with the group.

A daughter of Malcolm X was charged in 1995 with trying to hire a hit man to kill Nation of Islam leader Louis Farrakhan. Malcolm X’s widow, Betty Shabazz, said in a 1994 television interview that she believed Farrakhan was involved in her husband’s assassination.

Farrakhan, who was recruited into the Nation of Islam by Malcolm X, wrote in the Dec. 4, 1964, issue of Muhammad Speaks, the organization’s newspaper: “The die is set and Malcolm shall not escape. ... Such a man is worthy of death.” Farrakhan was chief minister of the Nation of Islam’s Boston mosque at the time the civil rights leader was killed.

Farrakhan acknowledged in a 2000 interview with CBS' 60 Minutes that his incendiary rhetoric played a role in the assassination.

The Omaha, Nebraska-born Malcolm X, who had changed his name to El-Hajj Malik El-Shabazz, was killed in Manhattan’s Audubon Ballroom by gunmen who opened fire during a speaking engagement. He was buried at Ferncliff Cemetery in Hartsdale, New York.

Russell Contreras is a member of The Associated Press' race and ethnicity team. Follow him on Twitter at http://twitter.com/russcontreras