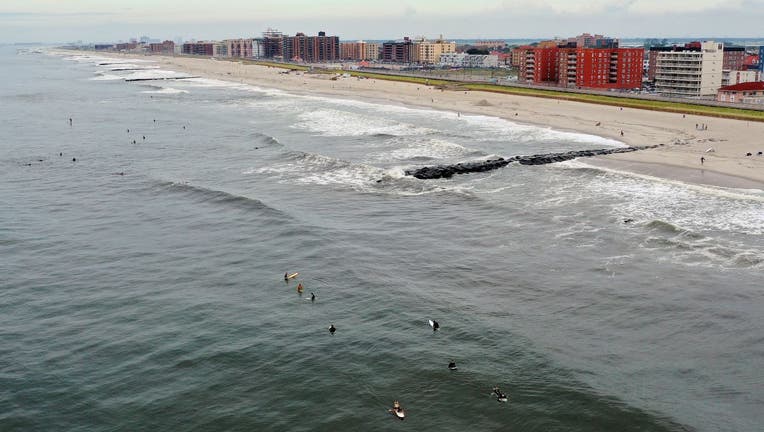 In an aerial view, surfers flock to the beach as wave heights elevate in advance of Hurricane Henri on August 21, 2021 in Long Beach, New York. (Photo by Bruce Bennett/Getty Images)

LONG BEACH, N.Y. (AP) - Nassau County police divers searched the waters near a beach with metal detectors Tuesday to try to locate missing artifacts that were stolen from a Jewish temple in August, including two handwritten Torahs.

A 23-year-old man has been charged with burglary among other charges for allegedly breaking into the Chabad of the Beaches at Temple Beth El in Long Beach in August and stealing the Torahs as well as other valuable artifacts, Newsday reported.

Rabbi Eli Goodman of the Long Beach congregation told the newspaper that the stolen Torahs were irreplaceable.

Long Beach police arrested the man last month when they found him at a beach in the town located on the southern coast of Long Island. The man was naked except for a Jewish prayer shawl and was holding a spear, the newspaper reported.

Nassau Police Commissioner Patrick Ryder said he did not think the attack was motivated by antisemitism and that the accused man seemed to be in mental distress.

"There is a rise of antisemitism around the country, but not so much in Nassau County and we want to keep it that way," Ryder said.

Nassau County and Long Beach police said they were increasing patrols around places of worship during the Jewish holy days.

No new artifacts were found Tuesday.

"We’ve had two big storms and we’ll see what we can find," said Nassau County Executive Laura Curran. "Even if we can find one remnant, I think it would give a sense of closure to the Chabad."

The newspaper could not reach an attorney for the man. He is being held in custody and is expected to appear in court on Sept. 16.