The mandatory evacuation order has expired for residents in Silverado Canyon, Williams Canyon and Modjeska Canyon. The expired orders come days after a massive mudslide swept the hillside in the Silverado Canyon area.

One Silverado Canyon resident says it sounded like thunder as mud and debris came down the canyon after overnight and early morning rain saturated the hillside behind their homes.

The Silverado Canyon mudslide was reported Wednesday around 7:10 a.m. in the area of Grundy Way and Anderson Way east of the city of Irvine. No injuries were immediately reported.

Ambrose Jimenez, a resident who lives on Silverado Canyon Road, described his experience waking up to the massive mudslide live on Good Day LA Wednesday morning.

"It was about a half an inch in about 20 minutes... It just came down so quickly. It sounded like thunder at first and then I looked outside and there was just a stream of mud with boulders coming down both sides of the house so I knew it was the mudflow from the outburst of rain that just occurred, just immediately," he told GDLA anchor Michaela Pereira.

Several vehicles were swept away in the mudslide, video from SkyFOX showed. 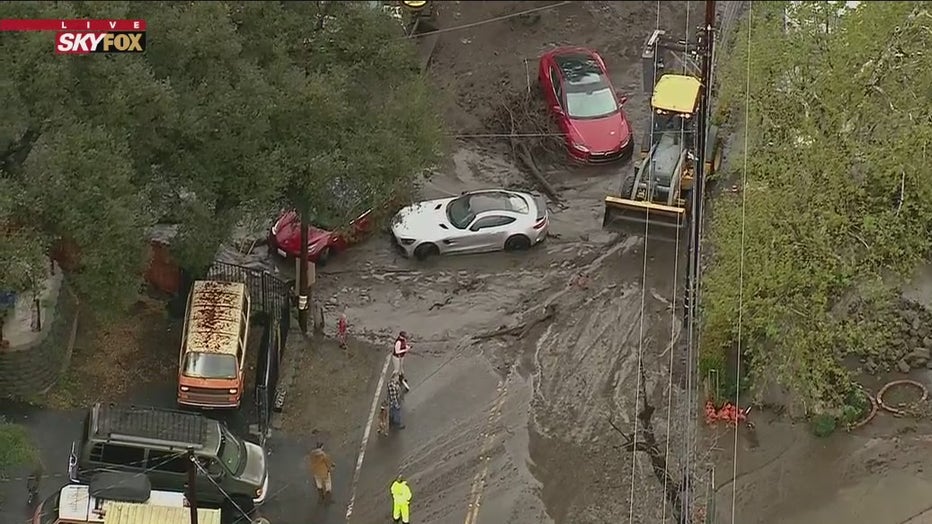 The Silverado Canyon mudslide is near the site of the Silverado Fire which burned in October and November 2020 in southern Orange County. More than 13,300 acres burned in the blaze. Williams Canyon and Modjeska Canyon were both ravaged by the Bond Fire in December 2020. The fire burned 6,686 acres, caused evacuations for 25,000 residents and injured 2 firefighters.

"They've got at least four mudslides" in the fire-scarred canyons, said Carrie Braun of the Orange County Sheriff's Department. Three of the mudslides were considered minor, she added.

"Public works is out there working with the (Orange County Fire Authority) to remove the debris, and that's going to take at least a couple of hours to make the roads passable,'' Braun said at about 10:30 a.m. Wednesday. "There are also some mudslides on private property so we're looking into reports of that."

A winter storm hit Southern California Wednesday, bringing steady rain and dropping snow in the mountains. The region was expected to see rainy conditions through Friday.

The National Weather Service warned that the storm could cause minor flooding is likely, with some mud and debris flows possible across recent burn areas.

Get your top stories delivered daily! Sign up for FOX 11’s Fast 5 newsletter. And, get breaking news alerts in the FOX 11 News app. Download for iOS or Android