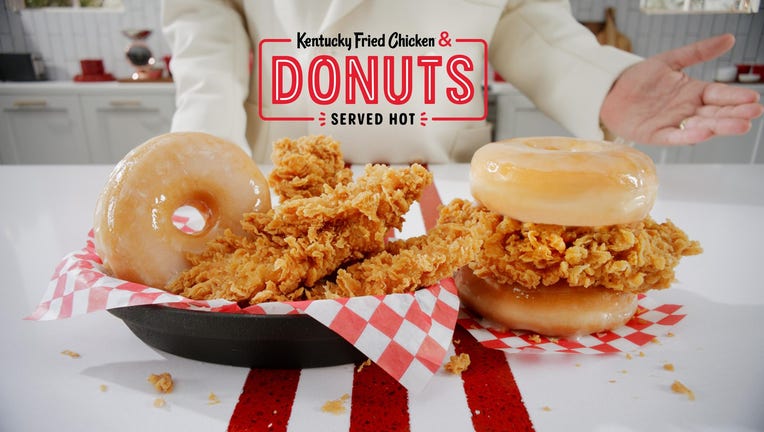 LOS ANGELES - Just when you thought the chicken sandwich wars were over – KFC has announced that it will be rolling out its "Kentucky Fried Chicken & Donuts" to its restaurants nationwide.

Not to be outdone by the likes of Popeyes and Chick-fil-a, the fast-food chain is sweetening the standard chicken sandwich concept with glazed donuts substituted for buns.

According to KFC, the sweet-and-savory treat will be available nationwide for a limited time starting Feb. 24 through March 16, or while supplies last. Chicken-and-donuts inspired menu options with include a Kentucky Fried Chicken & Donuts Basket meal or big basket meal (for when one donut just isn't enough) and the aforementioned Kentucky Fried Chicken & Donuts Sandwich.

KFC is also offering sweet-toothed customers the chance to add a glazed donut to any meal for an additonal fee.

"Chicken & Donuts is the newest fried chicken trend we're bringing to all of America," said Andrea Zahumensky, chief marketing officer, KFC U.S. "But not just any donut would do. Only a donut that's glazed-to-order and served piping hot every single time can stand next to our hand-breaded fried chicken. It's a finger lickin' good dish filled with glaze and glory."

If you find yourself in LA with a simultaneous craving for both donuts and chicken, you can make your way to 615 N. La Brea Ave – the pop-up shop will be open from 10 a.m. to 3 p.m. According to KFC, the first 50 customers in line will snag a free "Colonel's Dozen," comprised of six glazed donuts and six KFC Extra Crispy chicken tenders.