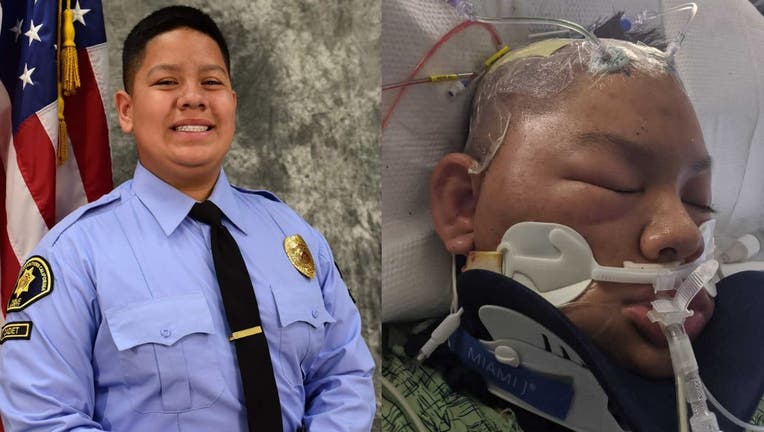 PALMDALE, Calif. - The mother of a 17-year-old boy is suing the Antelope Valley Union High School District, claiming the school's negligence resulted in her son's death.

On February 18, 2022, Jonathan Alfaro fell while he was in the truck bed of a truck in the parking lot of William J. "Pete" Knight High School in Palmdale. According to the family attorney, another student was driving recklessly and lost control after hitting a speed bump. Jonathan was then thrown from the truck and suffered severe injuries to his head, feet and legs.

After numerous surgeries, Jonathan died from his injuries on March 9, 2022.

During a press conference Wednesday, the attorney for the family said school officials knew the parking lot was a dangerous place where kids would regularly race, do "burnouts" and "donuts," have sex and do drugs as well.

Jonathan Alfaro, 17, fell out of a truck in the school parking lot and sustained major injuries. He died several weeks later from those injuries; now his mother is suing the Antelope Valley Union High School District saying their negligence led to her son's death.

"This parking lot was a danger zone and school officials should have acted, done more to intervene to protect the kids. They didn't do that and this family has to suffer," said attorney Michael Carrillo.

One of the minors who was driving the truck that Jonathan was in was charged with misdemeanor vehicular manslaughter.

Carrillo says the parking lot is not supervised by staff after school.

"Our home and heart are very empty without him," said Jonathan's sister. "You send your kids to school, thinking it's a safe place for them. I never would have thought something like this would happen. I do not wish this on any family but I do wish there had been supervision on the school parking lot to prevent this from happening."

Jonathan was an LAPD cadet; his family moved to Palmdale about two years ago.