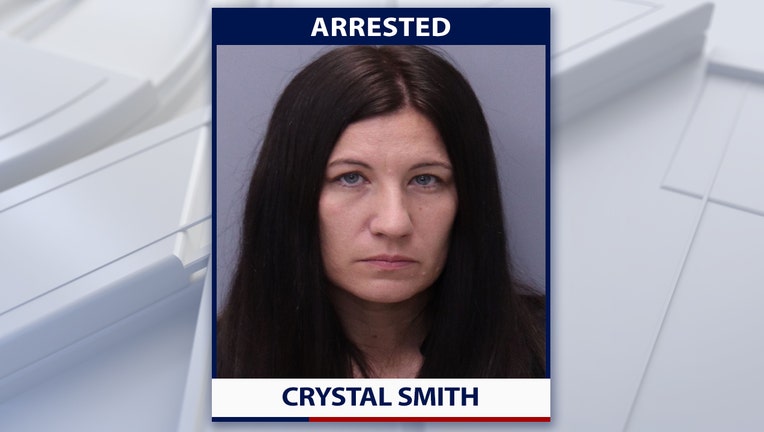 ST. AUGUSTINE, Fla. - Crystal Smith, 35, the mother of Aiden Fucci, the 14-year-old accused of stabbing his 13-year-old classmate Tristyn Bailey to death, has been arrested for evidence tampering.

According to the St. Johns County Sheriff’s Office, Smith turned herself in to authorities Saturday afternoon.

Bailey’s family reported her missing on the morning of May 9 and a neighbor found her body that evening in a heavily wooded area. The medical examiner said she had been stabbed 114 times.

Fucci was arrested for her murder the next day.

According to an arrest report, surveillance video from Fucci’s home shows deputies speaking with Fucci in front of Smith before he voluntarily left with them.

After Fucci left, the video shows Smith going into her son’s bedroom, removing a pair of blue jeans, taking them into an adjacent bathroom and scrubbing them over a sink. She was later seen taking those jeans into the master bedroom.

Approximately 10 minutes later, someone else is seen on video talking with Smith, who retrieves the jeans from the master bedroom. The pair are seen inspecting the jeans several times before Smith takes them back to Fucci’s bedroom.

Detectives spoke with the other person in the video who told them Smith told her she washed the jeans and said she didn’t know if there was blood on them or not. The witness added that she asked Smith why she would wash the jeans and told her she could get in trouble for it.

While investigating Bailey’s murder, Fucci was placed inside an audio and video recorded room with Smith and his father. While in the room, Smith asked Fucci if he was sure nothing was on his jeans from the previous night. He responded with, "I think so, why?" Then Smith is seen giving Fucci a questioning look and heard whispering, "Blood."

Using a search warrant, detectives found the blue jeans in question in Fucci’s bedroom. Detectives say the jeans tested positive for the presence of blood as did the drain of the bathroom sink where Smith was seen scrubbing them.

St. Johns County Sheriff Robert Hardwick said, "I remain incredibly proud of the men and women of the St. Johns County Sheriff’s Office for their continued thoroughness in this investigation. Our goal in any investigation is to ensure proper accountability across the board for successful prosecution." He added, "Crystal Smith will be held responsible for her role in this case and justice will be served for Tristyn Bailey and her family."

Fucci will be tried as an adult for Bailey’s death. If convicted, he could face life in prison.