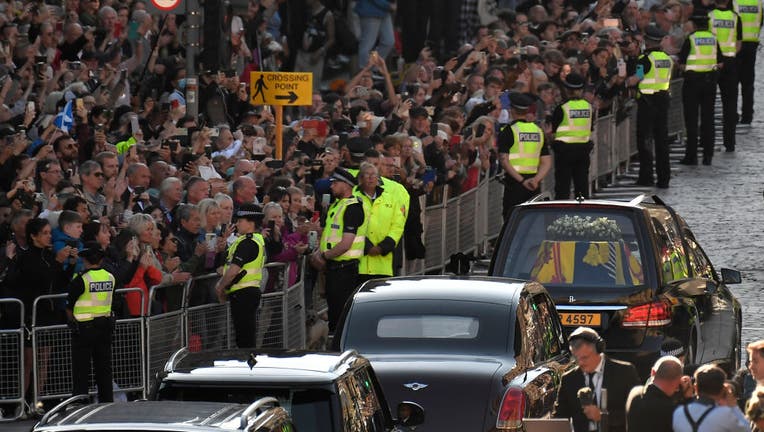 Members of the public gather to see the coffin of Queen Elizabeth II leaves from St Giles' Cathedral on September 13, 2022 in Edinburgh, Scotland. (Photo by Louisa Gouliamaki - WPA Pool/Getty Images)

Funerals for high-profile public figures draw crowds in the thousands — and TV audiences in the millions.

The latest to be publicly grieved is Queen Elizabeth II after she died last week at the age of 96. Thousands have already lined the streets in Edinburgh alone to get a glimpse of the processional spectacle, which will last more than a week before her state funeral in London on Monday, Sept. 19.

As the final goodbye to the queen approaches, here is a look at other high-profile, televised funeral events that drew historic crowds:

The assassination of then-president John F. Kennedy was the first globally significant event to be heavily televised, including his subsequent funeral.

NPR reported JFK’s funeral procession was watched in 93% of all homes that were equipped with TV sets — the largest viewing audience ever recorded to that point.

More than 250,000 people filed past the flag-draped coffin.

The caisson bearing the body of President Kennedy moves into National Cemetery. (via Getty Images)

Just a few years later, the funeral for Dr. Martin Luther King Jr.‘s was also historically viewed by millions at home. In person that day in Atlanta, as many as 100,000 people gathered along the four-mile-long procession.

Politicians from around the country, as well as fellow civil rights leaders, notable entertainers, authors and poets attended the service.

Some 2.5 billion people across the world tuned in to watch Princess Diana’s funeral following her untimely death in a car crash in Paris. At least a million lined the streets to watch the procession.

Her funeral lasted nearly six and a half hours, and the service at Westminster Abbey included a reading from then-Prime Minster Tony Blair and a performance of Sir Elton John’s "Candle in the Wind."

Her funeral to this day is still reported to be the most-watched.

Guardsmen of the Prince of Wales Company of the Welsh Guards attend the casket along the route of the funeral procession of Diana, Princess of Wales, only seven days after she was killed in an automobile accident in Paris. Members of the royal family walked behind the coffin, as did 500 representatives of the charities associated with the Princess. At least a million people lined the streets of central London to watch the procession with Diana's coffin from Kensington Palace to Westminster Abbey.  (Photo by Peter Turnley/Corbis/VCG via Getty Images)

Just one week after Princess Diana’s funeral, the world celebrated the life of a different mother across the world - Mother Teresa.

About 10,000 mourners lined up to pay their respects in Calcutta, India. The funeral reportedly drew millions of viewers from around the world, though portraying a multilingual ceremony proved difficult and there were video and audio problems during the broadcast.

"Some believe guilt over excessive Diana coverage was one of the factors in networks carrying Mother Teresa’s funeral live," The Associated Press reported at the time.

The actor-turned-politician was the first former U.S. president to die in the 21st century, ushering in the non-stop age of news coverage. Millions tuned in to watch his seven-day state funeral unfold, with many of the events available on replay.

Over 200,000 mourners made the journey to say their final goodbye to the former president, with about 4,000 able to attend the funeral in person.

Capitol Police on motorcycles lead the horse drawn procession as it makes its way down Constitution Avenue enroute to the Capitol June 9, 2004 in Washington, D.C. carrying the body of former President Ronald Reagan. (Photo by Paula Bronstein/Getty Images)

The sudden death of the King of Pop at age 50 consumed fans around the globe that summer.

After a private service, a public memorial on July 7 at the Staples Center in downtown Los Angeles was broadcast live around the world. More than 17,000 people were reportedly in attendance — and more than one billion watched from around the world.

His funeral is reported to be the second-most-watched funeral ever.

The rose covered coffin holding the remains of Michael Jackson rests in the front of the stage during his memorial service at the Staples Center in Los Angeles, California, Tuesday, July 7, 2009. (Photo by Wally Skalij/MCT/Tribune News Service via Getty Images)

An estimated one billion people worldwide were also estimated to tune into the interfaith service for the legendary boxing champion. The pallbearers included former boxers Mike Tyson and Lennox Lewis and actor Will Smith, who played Ali in the movies.

An estimated 100,000 people held signs and chanted along his procession. The more than three-hour memorial capped nearly a full day of mourning in Louisville.

Though the funeral for the Queen of Soul wasn’t a global spectacle, her homegoing was still quite the to-do in her hometown of Detroit.

Thousands showed up to pay their respects as her body lied in repose — in red high-heeled shoes — at the Charles H. Wright Historical Museum.

Roughly 20,000 people gathered for a public memorial at Staples Center in Los Angeles honoring him, his 13-year-old daughter, Gianna, and the seven other victims of the shocking helicopter crash.

Fans in attendance, many dressed in Kobe jerseys, for the "Celebration of Life for Kobe and Gianna Bryant" service at Staples Center in Los Angeles, California on February 24, 2020. (Photo by Frederic J. BROWN / AFP via Getty Images)