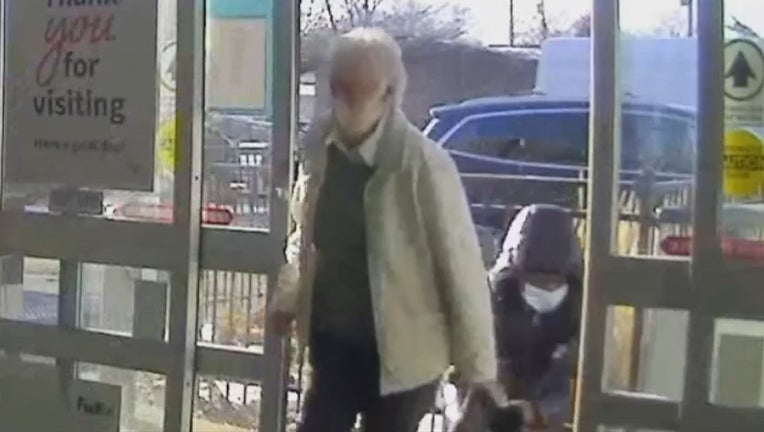 Surveillance video shows the purse being grabbed at the Walgreens on Larpenteur Avenue in St. Paul.

Isaiah Jamal Foster has been charged with one count of aggravated robbery in the first degree and one count of assault in the third degree after the 18-year-old’s mother called police to report that she was certain this was her son, as she recognized the coat he was wearing.

The St. Paul Police Department is asking for the public’s help in identifying a man who assaulted an 81-year-old woman and attempted to steal her purse as she was walking into Walgreens last week.

Foster was already in custody as a suspect in a carjacking incident in St. Paul on Dec. 28. He was wearing the same jacket when apprehended.

Foster will make his first appearance in Ramsey County District Court via Zoom.

"The actions of this young person caused significant trauma and injury to an elderly resident and spread fear throughout our community," said Ramsey County Attorney John Choi. "I want to thank investigators for their work on this case and the mother of the young offender for doing the right thing by turning her son into authorities."

The incident happened last Thursday around 2 p.m. outside the Walgreens on the 1100 block of Larpenteur Avenue West. Surveillance video showed a man attempt to rip a purse out of the arms of a woman as she is walking into the store. At that point, the St. Paul Police Department was seeking public assistance in identifying the culprit.

According to the complaint, a family member showed Foster's mother the video footage, resulting in her saying, "I’m 100 percent sure that is him," and although she does not trust police officers, she wanted to do the right thing. After "praying on it," she turned her son in, saying she did not raise him like that.

St. Paul Police say the 81-year-old victim suffered a brain bleed and had to spend Christmas in the hospital.

The woman who was targeted in the attack is back home on Thursday and recovering from the ordeal. She sat down for an interview with reporter Rob Olson to talk about what was going through her mind when she was attacked.

Judith Stuthman is back home albeit now with a walker because she fell and broke her pelvis while in the hospital. And that was because she had suffered a brain bleed and concussion during the attempted purse snatching.

She was violently pulled to the sidewalk as she entered the Walgreens. She had the strap of her purse wrapped around her wrist and stubbornness in her mind.

"What went through my mind was 'he’s not getting my purse,'" she explained. "And I didn’t realize until I saw the video that I had grasped onto the sliding door at Walgreen. Apparently, I knocked it off its track which is a surprise. I just know I was unconscious."

The suspect was turned in by his mother who saw the video and did what she thought was right.

"Thanks to her, but it had to be a terrible trauma to her also," said Stuthman.

Other purse snatchings in the metro

Detectives in Roseville are investigating if two separate cases of purse snatchings in Roseville and St. Louis Park earlier this month are connected to similar incidents in St. Paul that occurred last week.

In each case, the victims were older women and in two of the cases, stolen cards were used at the Richfield Target.

One incident happened on December 6 around 5:30 p.m., Sharon McWhite was leaving the Lunds & Byerlys grocery store in St. Louis Park off Highway 100 when she was attacked and had her purse stolen by a group of three men. They later used a stolen debit card at a Target store in Richfield. Roseville police told FOX 9 at the time they believed the same person or persons responsible for the St. Louis Park purse snatching were also responsible for another similar purse snatching in Roseville around the same time.

On Thursday, they confirmed their detectives have been in contact with St. Paul police and are looking into whether the Roseville case could be connected to the recent St. Paul robberies, but at this point, had not uncovered enough evidence to say either way.