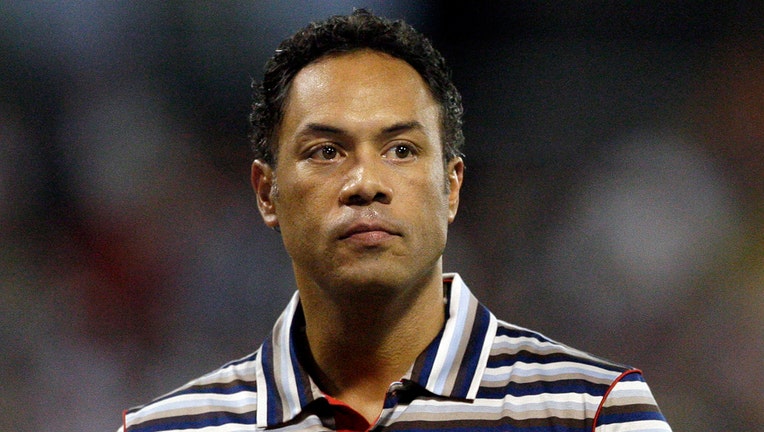 NEW YORK - Major League Baseball has fired Hall of Fame second baseman Roberto Alomar as a consultant and put him on its ineligible list after an investigation wrapped into an allegation of sexual misconduct.

In a statement, Commissioner Robert Manfred said a baseball industry employee earlier this year reported an incident involving Alomar from 2014. MLB hired an outside law firm to investigate.

"Having reviewed all of the available evidence from the now completed investigation, I have concluded that Mr. Alomar violated MLB's policies, and that termination of his consultant contract and placement on MLB's Ineligible List are warranted," Manfred said in the statement. "We are grateful for the courage of the individual who came forward. MLB will continue to strive to create environments in which people feel comfortable speaking up without fear of recrimination, retaliation, or exclusion."

The league said it won't release any more details about what happened to protect the privacy of the person who accused Alomar.

The Toronto Blue Jays also severed ties with Alomar, who was a special assistant with the team. The club also removed him from its Level of Excellence, which is the equivalent of a team hall of fame, and took down his banner at its stadium. Alomar played for the Jays for five seasons, including their World Series-winning years in 1992 and 1993.

"The Toronto Blue Jays believe in creating a safe, inclusive, and empathetic environment, where everyone involved in our game is respected," Blue Jays CEO and President Mark Shapiro said in a statement. "I am reaffirming our organization’s commitment to our employees, fans, media, and partners to uphold a culture of respect that treats all individuals with dignity."

In a statement posted to his social platforms, Alomar said he is "disappointed, surprised, and upset" by the news.

"With the current social climate I understand why Major League Baseball has taken the position they have," Alomar said. "My hope is that this allegation can be heard in a venue that will allow me to address the accusation directly."

Alomar was elected to the Hall of Fame in 2011. The hall was "shocked and saddened" by his actions, according to Jane Forbes Clark, the chairman of the board of the Hall of Fame, but his plaque will remain on display.

"His enshrinement reflects his eligibility and the perspective of the BBWAA voters at that time," Clark said in a statement.

Alomar said he wouldn't be making any further statements at this time.

"I will continue to spend my time helping kids pursue their baseball dreams," Alomar said.