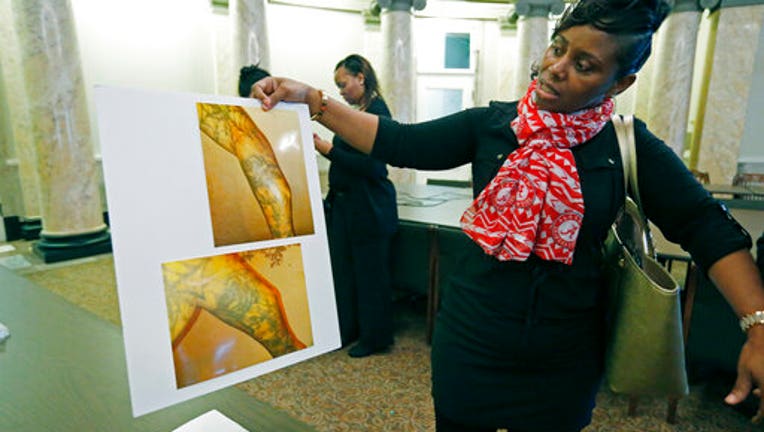 In this Thursday, Feb. 13, 2020 photo Sherren Smith, mother of inmate Wesley Clayton's children, holds a set of photos of his lower left arm that was broken in a recent prison riot at the Mississippi State Penitentiary. (AP Photo/Rogelio V. Solis)

JACKSON, Miss. (AP) — As the Justice Department investigates deaths and violence in the Mississippi prison system, one inmate had to wait about a month to get a cast on his arm that was broken during a prison riot, people close to the injured man say.

They said Wesley Clayton only got help after people persuaded a legislator to intervene on his behalf.

The state Department of Corrections will not answer questions about Clayton's situation.

“For privacy reasons, the department is unable to discuss an inmate’s medical condition,” department spokeswoman Grace Simmons Fisher wrote Thursday in response to an email from The Associated Press.

The Justice Department announced Feb. 5 that its civil rights division was opening an investigation of Mississippi prisons after a string of inmate deaths. At least 16 inmates have died in the state's prisons since late December. Most of them died at the Mississippi State Penitentiary at Parchman, and many were killed during outbursts of violence that also left an undisclosed number of inmates injured.

Clayton, 44, is in Parchman. He told relatives that the big bone in his lower left arm was broken during riots and that he was given an injection for pain but his bone was not set in a cast, said Sherren Smith of Meridian, the mother of Clayton's children.

Smith and Clayton's sister, Stephanie Truman of Meridian, were among the people who attended a Mississippi legislative hearing Thursday at the state Capitol to protest prison conditions. They took turns holding a poster with enlarged photos of Clayton's broken arm.

Smith said although she's no longer in a relationship with Clayton, their children were upset about their father's injury. She said she made multiple calls to Parchman and to the Department of Corrections during the past month trying to get a physician to see Clayton and set the broken bone.

“I said, ‘Ma'am, please have some mercy. This is somebody’s child,'” Smith said, recounting her conversation with one Parchman employee.

Smith said Clayton was taken to get his arm in a cast Wednesday after she contacted Democratic state Rep. Charles Young Jr. of Meridian.

Department of Corrections records show Clayton is serving 35 years for four convictions, including armed robbery in Jones County and grand larceny in Lauderdale County. His tentative release date is in 2025.