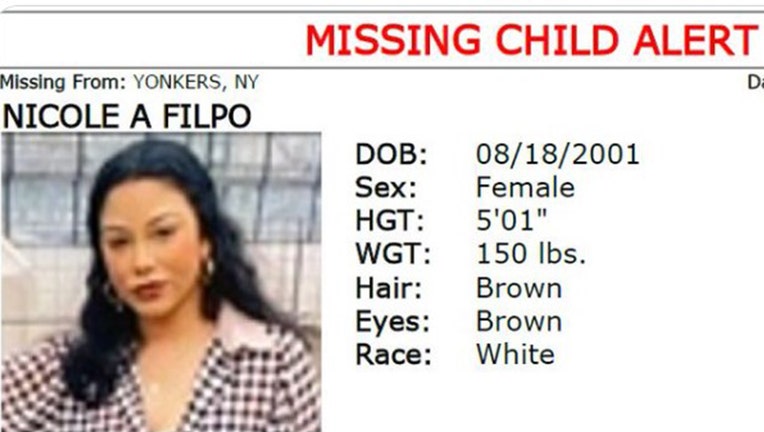 A missing child alert was issued early Tuesday for Nicole A. Filpo, a 20-year-old female from Yonkers.

NEW YORK - A missing child alert that was issued early Tuesday for Nicole A. Filpo, a 20-year-old female from Yonkers  was canceled several hours later.

No further details were provided.

When the alert was issued, authorities said Filpo was believed to be suicidal and in imminent danger. She was last seen on Dunbar Street at approximately 10 p.m. Monday.

She was described by police as 5'1" tall, 150lbs, with short brown hair and brown eyes. She was  wearing a gray tank top, gray sweatpants, white Vans sneakers, not wearing a jacket.

A Missing Child Alert is activated when someone under the age of 21 is missing and believed to be in danger due to special circumstances — such as cognitive impairment or medical condition — that place them at serious risk of harm or death, according to the New York State Missing Persons Clearinghouse.

You can view a list of missing children here. Many have been missing for several years.