Tashonna Ward went to the emergency room with chest pains, but after waiting several hours, she left to go to urgent care. She collapsed before ever making it inside.

MILWAUKEE - A 25-year-old woman who went to the emergency room complaining of chest pains and shortness of breath died shortly after leaving to seek help elsewhere due to long wait times, her family members claim.

Tashonna Ward was pronounced dead at Froedtert Hospital on Jan. 2 after her sister said she collapsed on the way to urgent care. She had complained about the overcrowded emergency room on Facebook several times.

“Idk what they can do about the emergency system at freodert (sic) but they damn sure need to do something,” she wrote around 7:35 p.m., according to the Milwaukee Journal Sentinel. “I have been here since 4:30 for shortness of breath, and chest pains for them to say it’s a two to SIX hour wait to see a dr.” 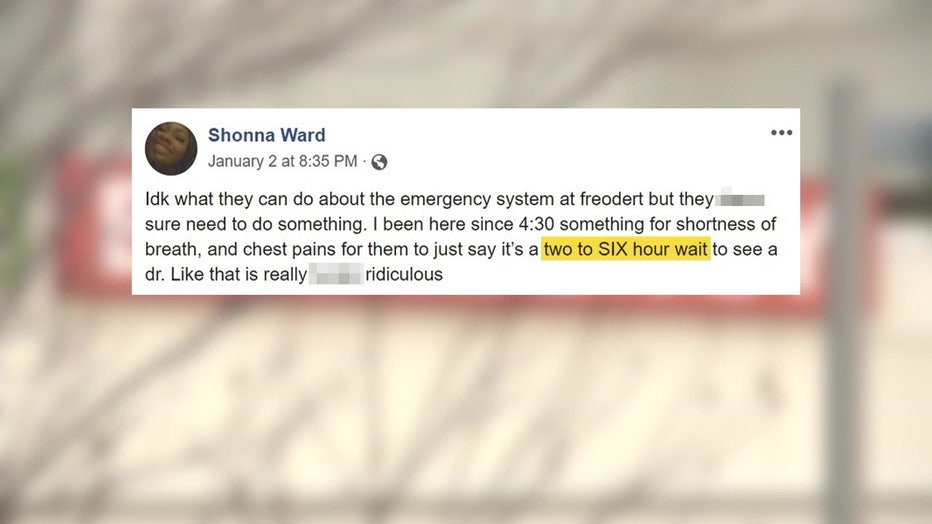 A cousin told the news outlet that Ward’s sister picked her up from the hospital before they stopped at their mother’s house to get an insurance card before heading to an urgent care clinic. The hospital then called Ward’s cellphone to check on her status, but her sister informed them that she had collapsed and was in an ambulance on her way back.

According to a report by the medical examiner, Ward arrived back at the hospital via ambulance at 9:07 p.m. and was unresponsive. She was later pronounced dead.

While the medical examiner has not determined a cause of death yet, Ward did have a history of an enlarged heart, which was detected in March after she gave birth to a baby who died when the umbilical cord wrapped around its neck. The report did note that a chest X-ray revealed cardiomegaly, but triage staff said her heartbeat appeared normal.

“The family is in our thoughts and has our deepest sympathy,” a hospital spokesperson told the Milwaukee Journal Sentinel in a statement. “We cannot comment further at this time.”

A GoFundMe page set up on behalf of the family described Ward as “an amazing daughter, sister, cousin, niece and friend loved by all.”