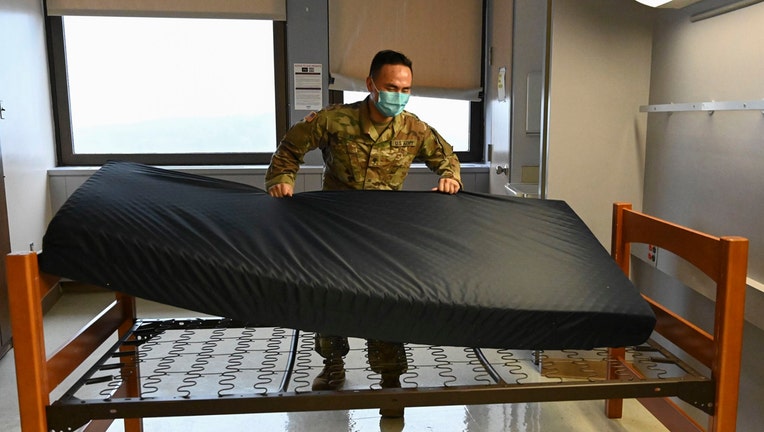 Members of the Connecticut National Guard moved beds and other furniture at the University of Connecticut Health Center in Farmington, Conn., April 14, 2010. (U.S. Army photo)

HARTFORD, Conn. (AP) - Soldiers with the Connecticut National Guard and U.S. Army Reserve have begun caring for COVID-19 patients at Stamford Hospital as part of a military effort to support medical staff across the country during the coronavirus outbreak, officials said Thursday.

The soldiers are working in a recently reopened building on the campus of the 305-bed hospital, said Capt. David Pytlik, a spokesman for the Connecticut National Guard. The medical crews include 85 Army reservists and nine state guardsmen, he said.

There were four patients being treated by the military units in the new area Thursday, hospital spokeswoman Andie Jodko said.

The Army has deployed about 15 medical units to help with patient care nationwide, including in Connecticut, New York and New Jersey.

Last week, Connecticut National Guard soldiers and airmen set up 200 beds at Stamford Hospital and tents outside for a triage area.

Stamford has been the hardest-hit municipality in Connecticut, with nearly 1,600 of the state's 14,755 confirmed coronavirus cases. Nearly 870 state residents have died, including 365 in Fairfield County, where Stamford is located.

Stamford Hospital was treating 138 patients with COVID-19 on Thursday. The hospital has increased intensive care unit beds from 20 to 62, and is prepared to increase total beds from 305 to more than 500 if needed, Jodko said.

For most people, the virus causes mild or moderate symptoms, such as fever and cough, that clear up in two to three weeks. For some, especially older adults and people with existing health problems, it can cause more severe illness or death.

In other coronavirus developments around Connecticut:

Newly released unemployment data for Connecticut show the state lost 7,600 jobs in March, statistics state labor officials noted do not reflect the full impact of the COVID-19 pandemic on the state's jobless picture. The data from the U.S. Bureau of Labor Statistics, released Thursday, stem from the second week of March.

"We know from unemployment insurance claims that the leisure and hospitality, health care and retail sectors were severely impacted by furloughs and closures," said Andy Condon, director of the Connecticut Department of Labor's Office of Research, in a written statement. A more accurate picture is expected next month.

Don Klepper-Smith, chief economist and director of research at DataCore Partners LLC, said the 7,600 job losses mark the largest monthly drop in Connecticut since January 2010. While there's been no formal declaration of recession, Klepper-Smith said "make no mistake about it" the U.S. and Connecticut economies are "in the midst of what is clearly a formidable recession" that could last through 2020 and possibly longer.

The city of Stamford plans to begin testing all police officers and firefighters for the coronavirus on Thursday, Mayor David Martin said.

Plans call for the city's nearly 600 first responders to be tested, he said.

Martin said the nation's shortage of testing equipment has hindered testing plans in Stamford, but testing capacity has recently increased. The mayor also wants to test all workers at nursing homes and senior centers in the city when more tests are available.

On Wednesday, Connecticut Insurance Commissioner Andrew N. Mais said certain front-line health care workers in Connecticut and Massachusetts will be eligible to apply for up to $25,000 of life insurance at no cost. The new coverage through HealthBridge will include a no-premium payment, three-year policy for a $25,000 death benefit for workers ages 18-50 and a no-cost $10,000 benefit for workers 51 to 60 years old.

Bridgeport Hospital has begun moving COVID-19 patients into a 32-bed mobile field hospital and it is nearing capacity, a hospital spokesman said Thursday.

The tent is being used to treat patients with less acute cases, but it is equipped with ventilators if needed, spokesman John Cappiello said.

The hospital had more than 190 coronavirus-positive patients as of Tuesday, with 57 of them in intensive care and 41 on ventilators, Hearst Connecticut Media reported. It has been averaging about 200 COVID-19 patients a day recently and the hospital is approaching capacity amid peak volumes, Cappiello said.

Lt. Governor Susan Bysiewicz said more than 50% of Connecticut households have responded to the 2020 U.S. Census so far. That makes the state the highest self-responding state in the New York Census Region. During a virtual press conference on Thursday, she reminded households that haven't responded to do so as soon as possible online, over the phone or by completing the paper questionnaires that are being sent to households.

The Connecticut Food Association says it supports Gov. Ned Lamont's call for all grocery store workers and customers to wear face masks. The organization's retail members distributed masks to their associates over the past couple of weeks and have encouraged them or personal coverings, such as a scarf, to be worn.