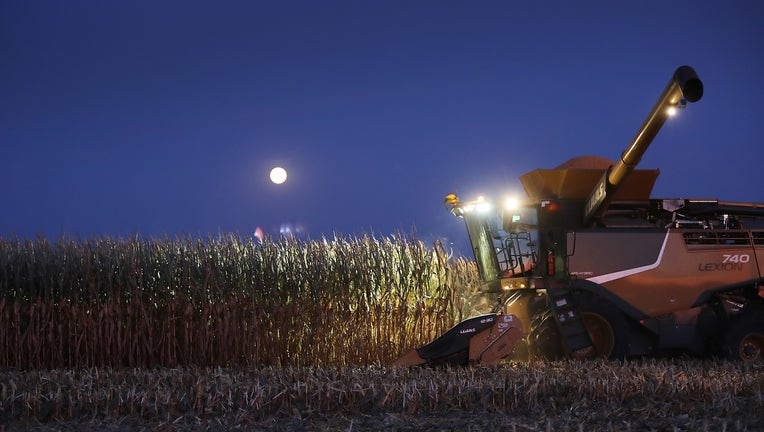 A combine is used to harvest the corn at the Hansen Family Farms on October 12, 2019 in Baxter, Iowa. (Not the cornfield where the boy was killed on Saturday.)(Photo by Joe Raedle/Getty Images)

CASEVILLE, Mich. (FOX 2) - Police say a 14-year-old deer hunter may have fallen asleep when he was run over by a corn harvester in Michigan's Thumb region.

Emergency workers were called about 9 a.m. Saturday to the cornfield in a rural area near the Huron County city of Caseville after a farmworker spotted the boy soon after accidentally driving over him.

The county sheriff's office says the boy from the nearby city of Elkton had been dropped off earlier for deer hunting at the field and might have fallen asleep.

The machine operator, a 25-year-old from Pigeon, was harvesting the field with a large Krone corn chopper, according to the Huron Daily Tribune.

"Unaware anyone was in it [the field], the hunter was accidentally driven over and found by the chopper operator a very short while later," the paper reported.

Investigators said they believed the boy may have fallen asleep upon arriving at the field. He was pronounced dead at the scene.

The Huron County Medical Examiner's Office has ordered an autopsy.

The teen's death was one of two children killed over the weekend. In St. Clair County, an 11-year-old was killed when he was shot by his stepfather while hunting deer Sunday night.

This past weekend was Michigan's Liberty Hunt, open specifically for minors and hunters with disabilities.

Information from the Associated Press and FOX News was used in this report.