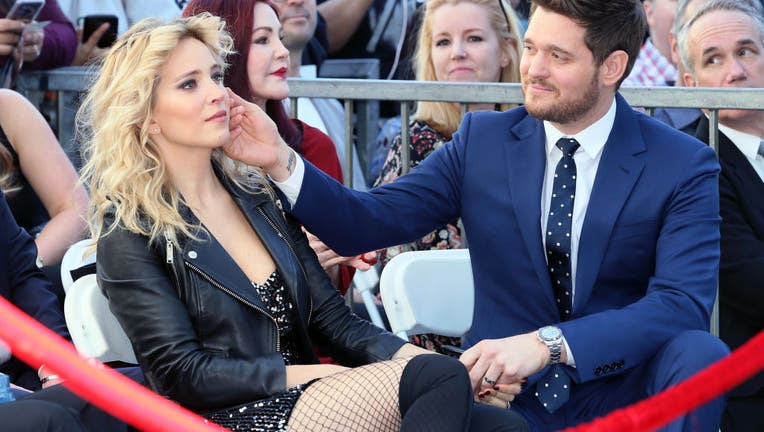 HOLLYWOOD, CALIFORNIA - NOVEMBER 16: Michael Buble and wife Luisana Lopilato attend his being honored with a Star on the Hollywood Walk of Fame on November 16, 2018 in Hollywood, California. (Photo by David Livingston/Getty Images)

Michael Bublé and wife Luisian Lopilato are now a family of four!

On Friday, the couple both took to Instagram and announced their sweet baby girl's name, Cielo Yoli Rose Bublé.

"From love comes life, light and her... our baby Cielo Yoli Rose Bublé. You finally arrived to our lives with your 3,8 kg!!! Thanks God for this infinite blessing, we love you!! Noah, Elias, Vida and your mom and dad."

The "Feeling Good" singer, 46, and the Argentinian actress, 35, both shared matching photos on social media of them each holding up their precious newborn’s foot. Cielo’s name means "sky" in both Spanish and Italian.

CELEBRITIES THAT HAVE WELCOMED BABIES IN 2022

In February, the pair first revealed the pregnancy news in Buble’s music video "I’ll Never Not Love You."

Bublé and Lopilato recreated romantic movie scenes from iconic films such as "Titanic" and "The Notebook." Towards the end of the video, he’s seen in a grocery store with his three kids and his wife’s visible baby bump.

The couple both are parents to daughter Vida, 3, and sons Elias, 6, and Noah, 8.

On Aug. 1, Lopilato posted a photo of her with Bublé, their three kids and her doula, as the family decorated her pregnant belly.

Her Instagram caption read: "As in all pregnancies, just two weeks before the birth, we transform the belly into art to have our little memory at home. We are waiting for you baby girl! Thank you so much to my doula for accompanying me in all this process!"

The mom of four has shared several photos displaying her baby bump and sharing her pregnancy journey with her 6.4 million followers on Instagram.

The Grammy-winning singer is currently on his "An Evening with Michael Bublé" tour, performing in major cities such as Philadelphia, Dallas and will end in October in Buffalo, New York.