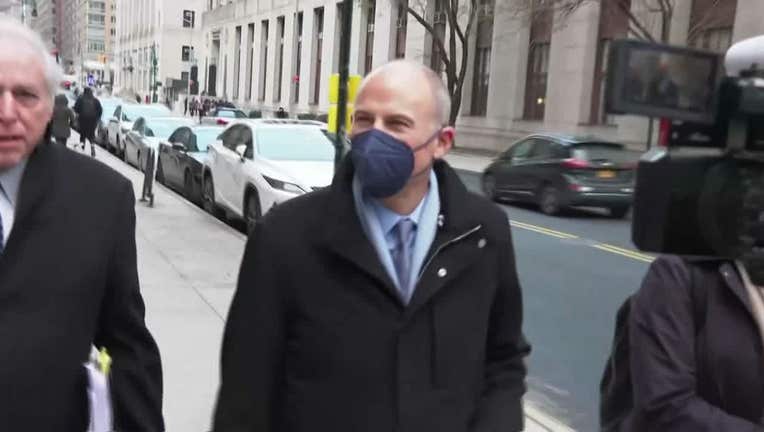 Michael Avenatti walks into a federal court in Manhattan on Jan. 24, 2022.

U.S. District Judge Jesse M. Furman granted Avenatti's request at his Manhattan trial on wire fraud and aggravated identity theft charges after he cited a "breakdown" with his lawyers over trial strategy, particularly on how to question a former longtime office worker for Avenatti who was testifying at the trial by video.

Daniels was expected to take the witness stand at the trial as early as Wednesday.

Although Furman told Avenatti earlier that his right to represent himself was "sharply curtailed" once his trial began, the judge granted Avenatti's request after Avenatti insisted he wanted to act as his own lawyer, as he did at a trial in California for six weeks last year.

At that federal trial, he represented himself against criminal charges that he cheated clients of millions of dollars, and the proceedings ended in a mistrial.

Before, in early 2020, Avenatti was convicted of trying to extort up to $25 million from sportswear giant Nike by threatening to tarnish the company's reputation if it didn't meet his demands. He was sentenced to 2 1/2 years in prison. At that trial, he did not testify and was represented by lawyers.

Avenatti became well known nationally in 2018 as he represented Daniels in lawsuits against then-President Donald Trump. Daniels had received $130,000 shortly before the 2016 presidential election to remain silent about her claims that she'd had a sexual tryst with Trump a decade earlier. Trump has denied it happened.

In opening statements Monday, Avenatti attorney Andrew Dalack said Avenatti had an agreement with Daniels, whose real name is Stephanie Clifford, to share proceeds of any book deal.

Dalack said Avenatti had loaned Daniels hundreds of thousands of dollars while he represented her.

A prosecution witness, Judy Regnier, testified Tuesday that she did not believe Avenatti had sent any of his law firm's money to Daniels between July 2018 and February 2019.

Regnier, who worked as a paralegal and office manager for Avenatti for about 11 years, said the firm's finances were in bad shape during that span.

"I was checking bank accounts to see if there were enough funds to make it through the week, or the day," she said.