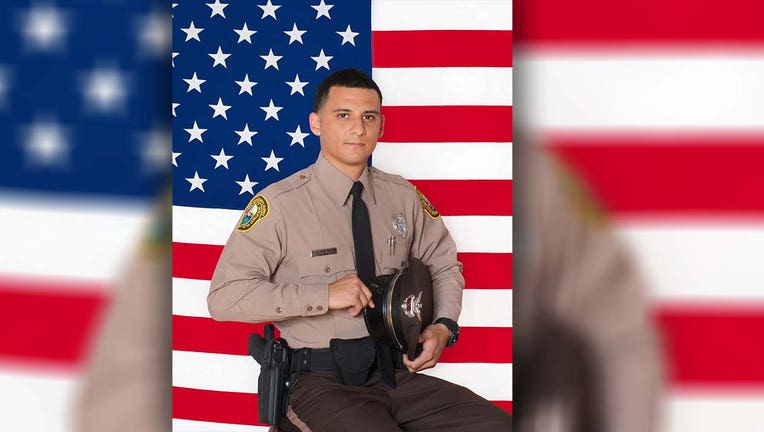 Miami-Dade Police Officer Cesar Echaverry was shot and killed in the line of duty earlier in the week.

MIAMI - A firefighter in Miami has been fired after writing "who cares" in a profanity-laced text about law enforcement officers after a Miami-Dade police officer was shot and killed in the line of duty.

WSVN reports the firefighter, who worked for Miami Fire Rescue, has been terminated, effective Friday.

The unidentified firefighter made the controversial comment in a group chat in response to the death of 29-year-old Miami-Dade Police Officer Cesar Echaverry on Wednesday, just after news of the officer's passing:

"Who cares? Another dead cop, probably against gun control. They didn’t give an [expletive] when kids were dying in that school shooting they stood outside. Cops exist for the government to exercise its monopoly on violence. They want the whole world to stop when one of theirs goes down. How many idiots I had to transport with honor guard their dead bodies from coronavirus because they all were too stupid to wear masks or get vaccinated. All cops are good for is protecting the rich property owners and the status quo. Everything else is a farce. [Expletive] the police."

In a statement, Fire Chief Joseph Zahralban confirmed the unidentified firefighter had been fired as a result of the text message.

"We have confirmed that the firefighter in question authored a written statement using a social media platform that demonstrated a disregard for human life, demonstrated a violent and antagonistic stance towards civil servants and represented conduct unbecoming of a Miami Firefighter," Zahralban wrote. "These characteristics make it impossible for this individual to carry out his duties as a first responder in the City of Miami."

The firefighter was relieved of duty on Thursday as Miami Fire Rescue conducted an investigation into the text message. Less than a day later, the agency announced his firing.

Officer Echaverry, 29, was shot in the head Monday night as he and other officers closed in on a wanted robbery suspect. He died from his injuries two days later.

Echaverry has been with Miami-Dade Police for five years, and was assigned to the department’s robbery intervention detail, the department confirmed. His friends told the Miami Herald he was moving up and planned to get married.