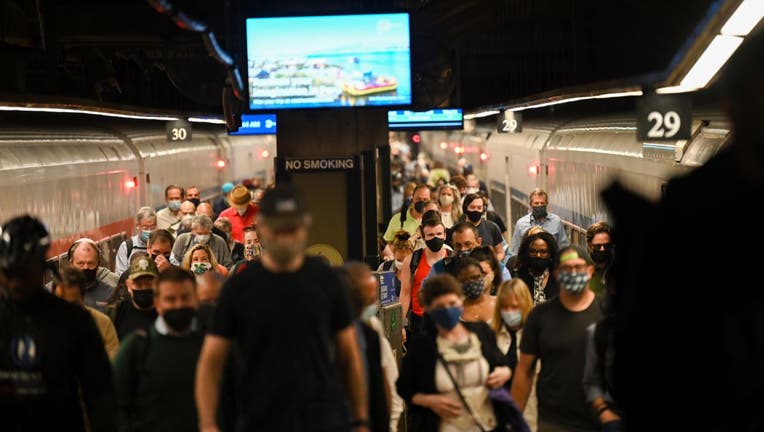 Commuters wearing masks disembark from a Metro-North train during the morning rush hour commute on May 25, 2021 in New York City. (Photo by Alexi Rosenfeld/Getty Images)

NEW YORK - The MTA has announced that the Metro-North Railroad will resume regular service once again beginning Monday, September 20.

The Hudson Line sustained major damage after the historic rainfall from remnants of Hurricane Ida caused landslides and downed trees all across the line's length. Crews have been working to clean up ever since.

RELATED: MTA to riders: Wear a mask — it's still the rule

Some train times will be adjusted to reflect earlier departures and slightly longer trip times due to reduced capacity on the Hudson Line because of landslides and culvert damage. Customers are being asked to plan for up to an extra five minutes of travel time while restoration work continues.

"I cannot emphasize enough the Herculean effort put forth by our crews in the two weeks since the storm ravaged our entire territory, especially the Hudson Line," said Catherine Rinaldi, President of Metro-North Railroad. "It is because of their efforts that that we are now able to resume pre-Ida service levels beginning on Monday. I cannot thank everyone involved enough for their dedication and diligence."

At least 50 people were killed in six Eastern states as record rainfall from the remnants of Ida overwhelmed rivers and sewer systems. Some people were trapped in fast-filling basement apartments and cars, or swept away as they tried to escape. The storm also spawned several tornadoes.