People did come to beaches and parks on Long Island. But perhaps the so-so weather kept away larger crowds.

WANTAGH, N.Y. - When asked to describe this Memorial Day compared to those of years past, one person told FOX 5 NY: "It's not like the way it used to be." Another said: "Different."

Instead of parades, some people took to the boardwalk in Long Beach where signs posted reminded everyone to stay safe.

Family and friends gathered. Some even reunited for the first time since the rise of the COVID-19 pandemic.

Every other bench was cordoned off to allow for social distancing. Bikers were only allowed to ride on the boardwalk before 10 o'clock in the morning. And everyone—no matter what time of day—is encouraged to keep moving. Police were patrolling for those ignoring the rules.

Some officials believe the subpar weather this weekend and on Monday worked in their favor by buying time to come up with future plans for the beaches, especially in New York City where the mayor still has them closed.

The cloudy cool weather left plenty of space at Jones Beach State Park in Wantagh, Nassau County, where sanitizing stations were set up and down by the water so were some blankets—6 to 10 feet apart.

Parks away from the water were warmer. The playgrounds were off-limits but small groups gathered by the picnic tables at Sunken Meadow State Park in Kings Park, Suffolk County, and some people even barbecued.

But you couldn't grill at Eisenhower Park in East Meadow, Nassau County. Instead, people brought their own food. Some spent the day sunbathing while others walked and biked.

And just about everyone had a mask on or in hand, making this year different but no less meaningful. 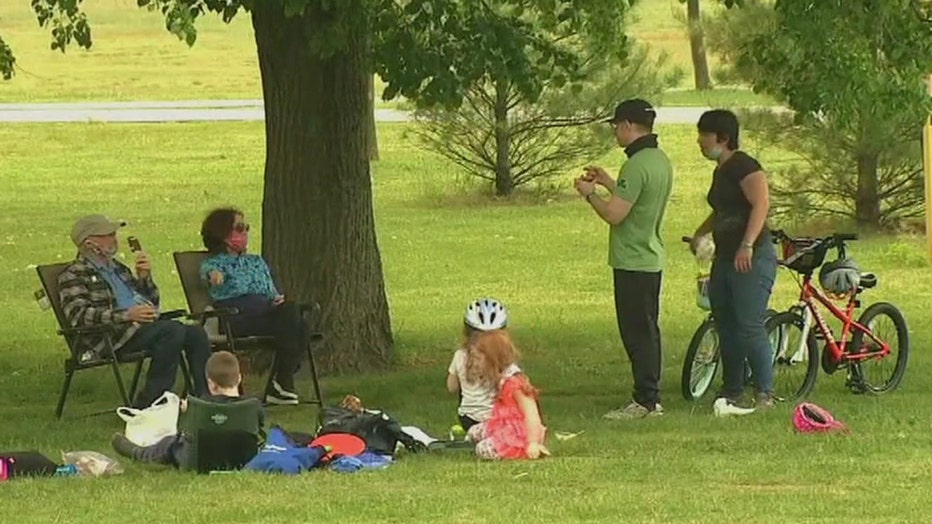