Cannabiz: The business of bud

Uncle Budd is cultivating a new business on the streets of New York City, providing a service that is wanted in the community.

NEW YORK - On 116th St. in Harlem, there’s no famous tree, like the one that grows in Brooklyn. But there is a budding business, Uncle Budd that is. A lime green hitched trailer that’s parked seemingly between Prohibition and Amsterdam.

FOX 5 News met with a man, Attaché, the ambassador of the Uncle Budd operation. Their product, is marijuana. And their community is Harlem.

The bold part of their existence is that while recreational marijuana for adults was decriminalized in New York State last year, the sale of weed is as illegal as it ever was. The process to establish state regulations for sales was interrupted when Governor Cuomo resigned amid scandal. Making this high visibility business, remarkable.

"We just wanted to bring good quality products to the community," Attaché says.  "You have people of all walks. They come in business suits, elderly, younger, 21 years and older."

The truck it's off could not be easier to find, there is a neon sign on top. And the vehicle is in part surreptitiously on some side street, but right at the busy intersection of Frederick Douglass Boulevard.

Open from morning until night, for what we witnessed to be a diverse customer base. As visible as it is, it seems invisible to authorities as we watched police cars zip on by, some pulled up a few steps away to investigate an unrelated assault. Not so much as a glance was paid to the truck. 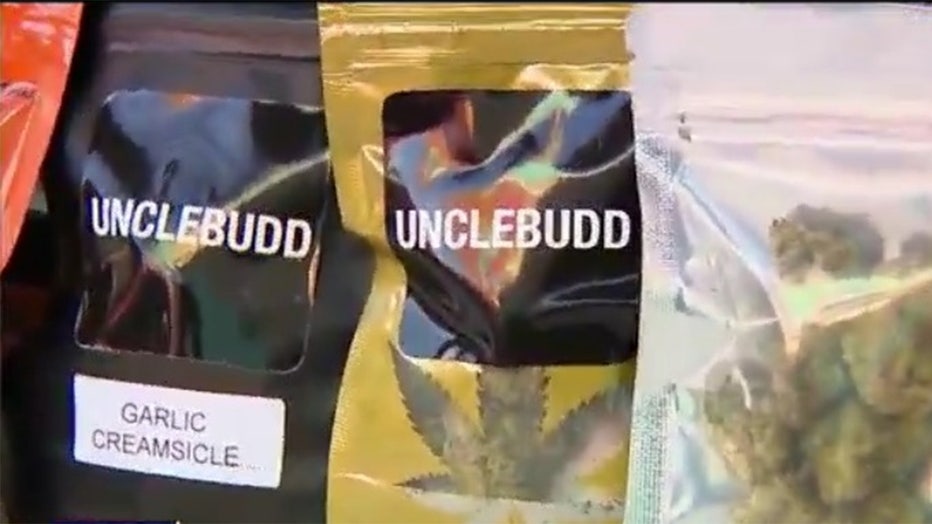 The operation let FOX 5 News in to see how it works. The products are catchy, resembling a lineup at your local bodega. Only these products contain medical-grade marijuana for recreational use.

There’s a QR code on the side of the truck that pulls up their entire stock on a phone. Listing the properties of each item in detail, what it contains, what kind of flower, how it affects a person and which ailments it’s designed to relieve. Products range from $10-$30, including edibles.

When Uncle Budd first opened up at the Harlem location in September, they had some problems with local law enforcement. It’s not illegal to be in possession of marijuana, to sell it is a different story. But they found an ingenious way to get around it, just like at some museums they work off of suggested donations. A civic compromise if you will.

The greatest challenge ahead for the team behind Uncle Budd comes as New York State develops the rules for who can sell marijuana. There are those who want to automatically bar anyone with a criminal record from being allowed to sell. But such a stipulation would disproportionately disqualify residents from neighborhoods like this one where many have been arrested for marijuana fences.

"There’s plenty of people locked up for smoke and joint walking down the street," Attaché says.  "But these people are so smart, still going to school… so they should actually allow these people who have been locked up with these criminal records to give them a chance to on their own and actually do it in a professional way."

Attaché says the money they earn stays in the neighborhood instead of going to a corporation outside of New York with stockholders, outside of New York. And he only hires locally because he says, those are the people who deserve a chance at a professional career.

A bit to cultivate the business side of a budding industry.