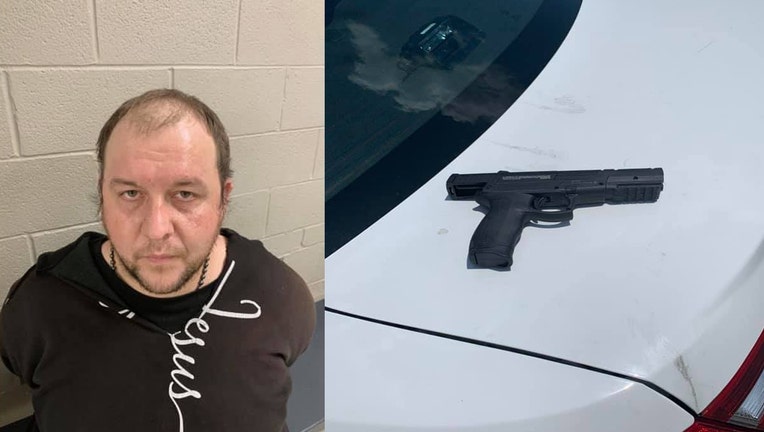 James Springer (left) and the gun (right) that was found in his car. (Stafford County Sheriff's Office)

VIRGINIA - A Virginia man was arrested after a disturbance over a Happy Meal at a McDonald's and two separate incidents involving a gun in the area.

Stafford County authorities say it started just before 10 a.m. on Saturday.  A deputy responded to a call of a man making threats at a McDonald's.

Employees said a DoorDash driver was unhappy that Happy Meals cannot be ordered from the breakfast menu.

The driver became agitated and, before leaving in a white Toyota sedan, commented that he would return to the store and execute everyone, police said.

Deputies were still at the McDonald's when a call came in for a man with a gun.

The victim reported the driver of a white Toyota Yaris pointed a handgun at her and her passengers while passing through the merge area onto I-95.

As deputies were investigating they got a call from another victim. That person said they were parked at Panera Bread when the suspect allegedly drove into the lot in a white Toyota sedan and pointed a gun at them.

The victim says he recognized the suspect as a DoorDash driver but did not know his name.

As the search for the suspect continued, the McDonald's called to report the irate DoorDash driver had returned.

A sheriff's deputy arrived and took James Springer, 36, into custody without incident.

Deputies say they were able to connect him to all of the incidents.

They found a  black BB gun in the car.

Police say that Springer told them he thought recent decriminalization efforts made it legal to point BB guns at people.

Springer was charged with disorderly conduct, abusive language, and four counts of brandishing.  He was held at the Rappahannock Regional Jail on a $1,500 bond.