Zelenskyy's office called the visit a "strong signal of bipartisan support for Ukraine" on the 80th day of its war with Russia.

McConnell's office had not released any information about the trip as of Saturday morning. Video from Zelenskyy's office shows Republican senators Susan Collins of Maine, John Barrasso of Wyoming and John Cornyn of Texas greeting the Ukrainian president. 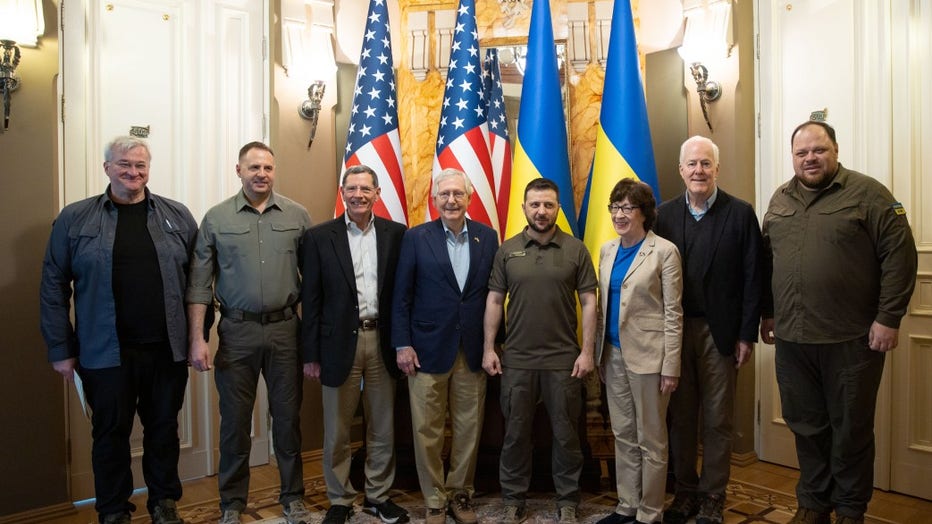 House Speaker Nancy Pelosi and a Democratic delegation visited Kyiv on May 1.

On Saturday, Russian troops were withdrawing from around Ukraine’s second-largest city after bombarding it for weeks, as Kyiv and Moscow's forces engaged in a grinding battle for the country’s eastern industrial heartland.

Ukraine’s general staff said the Russians were pulling back from the northeastern city of Kharkiv and focusing on guarding supply routes, while launching mortar, artillery and airstrikes in the eastern Donetsk province in order to "deplete Ukrainian forces and destroy fortifications."

Zelenskyy said Ukrainians were doing their "maximum" to drive out the invaders and that the outcome of the war would depend on support from Europe and other allies.

"No one today can predict how long this war will last," Zelenskyy said in his nightly video address late Friday.

The U.S. House approved an additional $40 billion this week to help Ukraine, but the vote has been delayed in the Senate because of efforts by U.S. Sen. Rand Paul, who demanded the inclusion of a proposal to have an inspector general scrutinize the new spending.

"They’re only asking for the resources they need to defend themselves against this deranged invasion," McConnell said this past week of the Ukrainians. "And they need this help right now."