First Look: Back To Win | MASTERCHEF

Gordon Ramsay, Aarón Sánchez, and Joe Bastianich as well as returning contestants introduce you to the new season of MasterChef Back To Win.

Chicago - Welcome to "MasterChef" recaps! In the season 12 premiere, "Back to Win — Audition Battles," we get — you guessed it — auditions, as the MC kitchen welcomes back 40 former contestants, all competing for a chance to snag the title (and the cash that comes with it). Miss the premiere? You can watch On Demand, on FOXNow and on Hulu.

It seems 2022 has All-Stars fever. First, "RuPaul’s Drag Race All-Stars" returned with a "Queen of All Queens" all-winners season. Now "MasterChef" is getting in on the game. For season 12, the contestants are "Back to Win," all of them previous players from the show’s first 11 seasons who fell just short of that MasterChef title. (The roster includes — squee! — two kiddos from "MasterChef Junior," all grown up.)

Now, they’re back, dozens of hopefuls getting their second chance at that chef’s coat and the opportunity to get the title they were denied the last time they were in the MasterChef Kitchen. But, as with any "MasterChef" season, we’ve got to spend the first few hours slashing our cast in half before the real culinary challenges begin. This is the first of three such "Audition Battles" — so let the cooking commence!

"MasterChef": May the best legend win 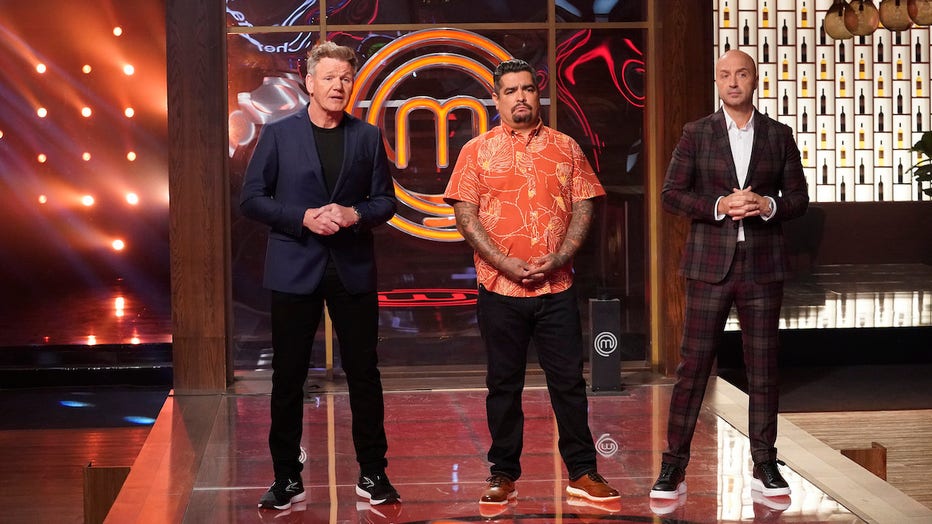 As Gordon Ramsay explains to the camera in a classic Sorkinesque walk-and-talk (barking orders to PAs as he dons his signature navy blazer backstage), he "believes in second chances." That’s why the kitchen is more tightly stuffed than a Chicken Kiev — a whopping 40 former "MasterChef" contestants, families in tow for moral support, have returned for another shot at culinary glory.

We get a few glimpses of some familiar faces from previous seasons, but few delight more than Dara (now 20) and Shane (now 13), two former "MasterChef Junior" contestants who’ve now hit adulthood and are ready to play in the big leagues. It’s great!

Unfortunately, we’ll have to wait for future episodes to see how those two fare. The "Audition Battles" commence with several rounds of four-chef showdowns, in which each chef makes their signature dish and presents it to the judges. (All three regular judges — Ramsay, Aarón Sánchez and Joe "I am physically incapable of resisting a vibrant windowpane suit" Bastianich — return this season.) They’ve got 45 minutes to make their dishes, and only two chefs from each quartet will get a white apron and a ticket to the primary competition.

"MasterChef" Back to Win Round 1: Runners up stare each other down 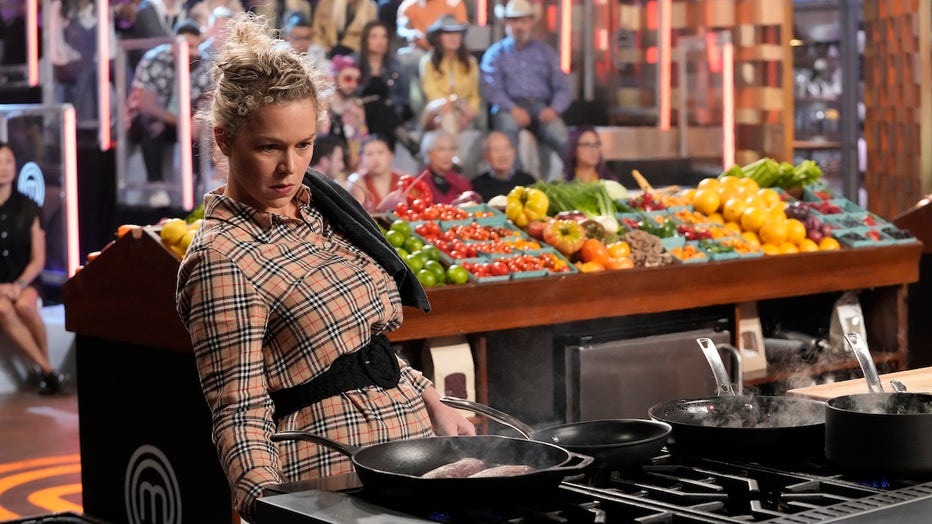 MASTERCHEF: A contestant in MASTERCHEF on FOX

First up is a foursome of contestants who took second place in their respective MasterChef seasons: soft-spoken Adrien from season 2, serving up a straightforward New York Strip embellished with a bone marrow salsa macha; Southern belle Brandi from season 7 with a venison loin served over an acorn squash puree; tatted-up former drummer Derrick from season 6, hoping to impress with crab and ricotta squid-ink agnolotti with lobster cream sauce and uni on top; and season 4’s Natasha, taking a risk with a deconstructed cheesecake.

"I’m just gonna use the components and focus on the taste of it," she assures Aarón — the classic line for all who offer up "deconstructed" anything in these cooking competitions.

The cooking itself goes relatively smoothly for everyone, save, of course, Derrick, who sweats and strains through two different batches of squid ink dough after the first proves too dry. The critiques go even better: Adrien’s steak is a little rare for Gordon’s taste, but the others dig it. Natasha’s deconstructed cheesecake (beautifully plated with a streak of bright-red raspberry powder that Aarón nonetheless criticizes for being gritty) shows potential. Brandi nails her venison, a notoriously gamey meat that’s hard to get right.

The real drama comes from Derrick, whose smorgasbord of components could easily overwhelm (he vehemently defends his use of the uni to Gordon; "I’ll let you know once I’ve tasted it," Ramsay bites back). And yet, the gamble pays off, and both he and Brandi get white aprons and a chance to compete.

"MasterChef" Back to Win Round 2: A season 9 showdown 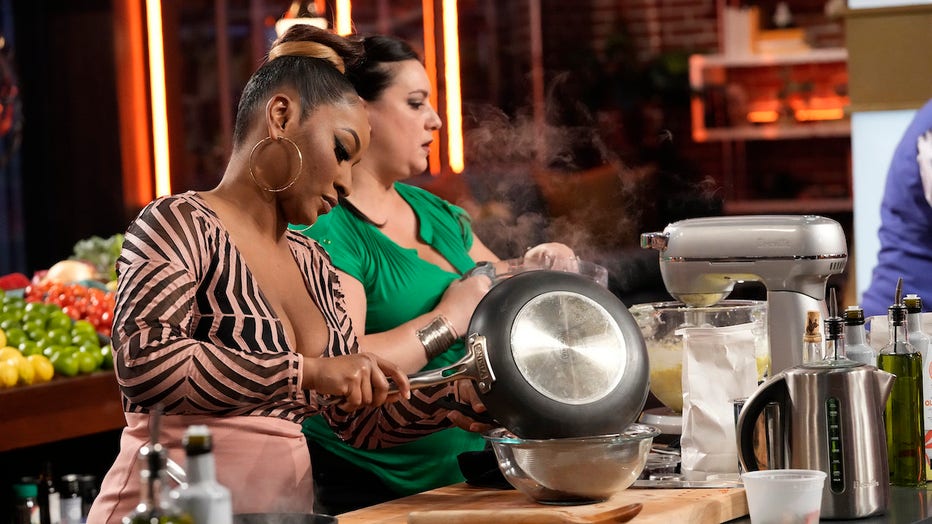 MASTERCHEF: Contestants in MASTERCHEF on FOX

Next up is a quartet of cooks from season 9: proud Chicagoan Julia, bowtie-loving former lawyer Lindsay, food researcher Emily and confident, stylish Shanika. Already, there’s heat in the kitchen, as there’s no love lost between Emily and Shanika in the years since their spats on the show. (Emily’s also still kicking herself over her decision to opt into her team’s elimination challenge, a choice that led to her ouster).

Still, they all press on with their dishes. Julia whips up a simple-but-scrummy Italian almond cake with espresso mascarpone mousse, braised cherries and almond glass (my mouth’s watering just tying that sentence). Lindsay’s rocking an upscale play on chicken and dumplings, with a chicken roulade and Parisian-style gnocchi. Emily goes classic with a crab and mascarpone tortellini, served in a lemon beurre blanc.

It’s Shanika’s dish that turns the most heads: she’s going for a sweet(!) arancini filled with strawberry and covered in a honey glaze. Naturally, Joe is gobsmacked at the idea. They’re more worried about Julia and Emily, though, who are making cakes and fresh pasta from scratch in 45 minutes without much time to rest.

That said, the critiques go well, with Lindsay’s rustic dish getting plaudits save for Gordon’s complaint that the flour in her roux-based sauce wasn’t cooked down enough. (You gotta be patient with that roux, Lindsay.) Julia’s cake does well, but they trot out a familiar old chestnut: "Is this good enough for MasterChef?" Emily’s tortellini "oozes precision," despite some complaints that the mascarpone with the crab is too sweet-on-sweet.

But we’ve all got to know if Bastianich, an expert in Italian cuisine, will brook a sweet arancini on his watch. He tastes it and murmurs, "That’s a curveball for ya." But hey, he throws a curveball of his own as he proceeds to rave over it.

Suddenly Emily and Shanika are both back in the competition, which is exciting for reasons both culinary and drama-related.

"MasterChef" Back to Win Round 3: Battle of the fan faves 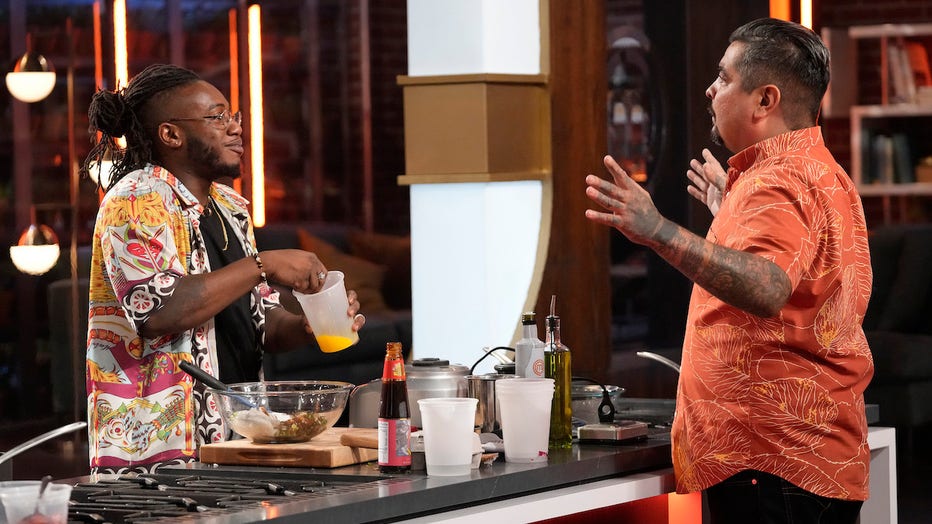 MASTERCHEF: L-R: Contestants with Aaron Sanchez in MASTERCHEF on FOX

The next four contestants are fan faves, each memorable, each looking at a shot at personal redemption. There’s season 10’s Wuta, the free-spirited vegetarian whose impressive skill set has only grown since leaving the show; sweet-natured Muslim chef Amanda, an expert baker who nevertheless got knocked out of season 6 after serving raw cake; season 8’s Lexi, who’s back at only 25 to prove herself again; and self-assured, passionate Christian, returning from season 5 to do both himself and his grandmother (who recently passed away) proud. Just have those tissues handy when he chokes up during the interviews, folks.

The cooking is fast and furious; Wuta introduces Chef Sánchez to the phrase "swag drip," which he asks the audience to help him define: "Ahh, style, órale," Aarón says in realization. Never change, you beautiful, bold-shirted man. Wuta’s dish? A panko-encrusted shrimp burger alongside some hush puppy-sized tater tots I need to eat this instant. Lexi’s going simple, with some pan-seared scallops, fried calamari and an herb salad. Yum.

But it’s Christian and Amanda who dive into the most high-stakes cooks this round, the former cooking a bourbon-glazed salmon as if his life depended on it (we get our first "GET IT ON THE PLATE!" moment from Gordon this season), and Amanda hunting for validation with a za’atar olive oil cake. "It’s not raw," she murmurs in relief as she plates.

However, is it enough to pass the judges’ muster? Wuta’s burger "perplexes" Aarón, but in a good way, while Christian’s salmon is "rockin’". (Gordon mutters, "wow, he’s back" upon tasting, and if that’s not an endorsement I don’t know what is.) Meanwhile, Lexi’s dish gets dinged for the unnecessary addition of calamari and a misjudged sauce.

It’s Christian and Amanda (who redeems herself with her "moist, light, evocative" cake) who get the aprons, and now we have six of our twenty contestants thus far. 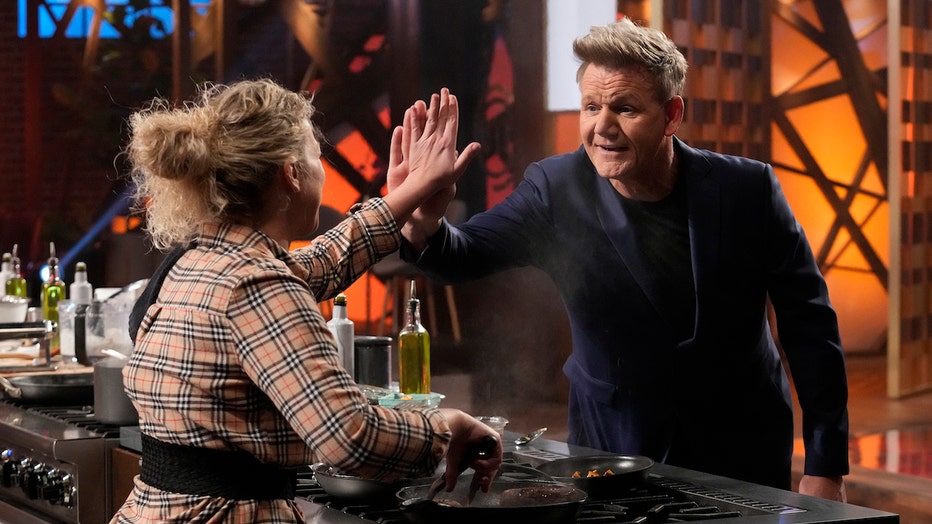 MASTERCHEF: L-R: A contestant with Gordon Ramsay in the season premiere of MASTERCHEF airing Wed. May 25 (8:00-9:00 PM ET/PT) on FOX

While the audition stage of a "MasterChef" season is never a huge indicator for how the season will go, the "Back to Win" conceit is a neat one for longtime fans of the show. Most compelling are the stories we get to see from each of the contestants about the ways in which their culinary careers have been transformed by their time in the MC kitchen, even if they didn’t win the trophy.

Some got the chance to start a restaurant of their own; others are private chefs with boutique catering businesses. (Lindsay opened a bakery with her wife Stephanie after her season, and the pics are adorable.) Several of them gush that they’ve gotten to travel the world.

You love to see it, and so far, the season serves as both a reunion of old contestants and a referendum on the show’s impact on the food careers of its participants.

Next time on "MasterChef": the second of three episodes of these battle-royale "auditions," as we continue to whittle down the playing field. Personally? I’m most excited by the season-teaser’s reveal that we’re getting the latest in Gordon Ramsey’s long legacy of tossing poorly-cooked food into the sky during an outdoor team challenge. (You eat that chewy scallop, seagull. You earned it.)