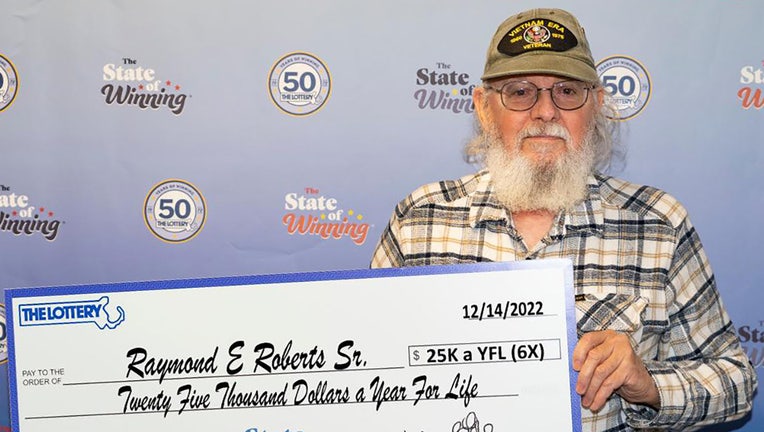 DORCHESTER, Mass. - A military veteran who's been playing the same lottery numbers for over 20 years finally had his strategy pay off — six times over.

Raymond Roberts Sr. won the Massachusetts State Lottery's Lucky for Life game, which awards $25,000 a year for a minimum of 20 years. But he won the prize six times in a single drawing after buying six tickets with the same numbers.

Roberts told lottery officials it was just "intuition" to buy multiple tickets with those numbers, which are a combination of anniversary dates and birthdays. He said he has been playing those numbers in multiple games for more than 20 years.

The Vietnam-era veteran claimed his prizes Thursday, choosing the $390,000 lump sum cash option on five of the six prizes for a total of $1.95 million before taxes. For his sixth prize, he received the first of a minimum of 20 annual payments of $25,000, lottery officials said.

Roberts said he plans on using a portion of his winnings to buy a motorcycle.

He purchased his winning ticket at a liquor store in Fall River, Massachusetts, which will receive bonuses for selling the winning tickets totaling $30,000 — $5,000 for each of the six tickets.