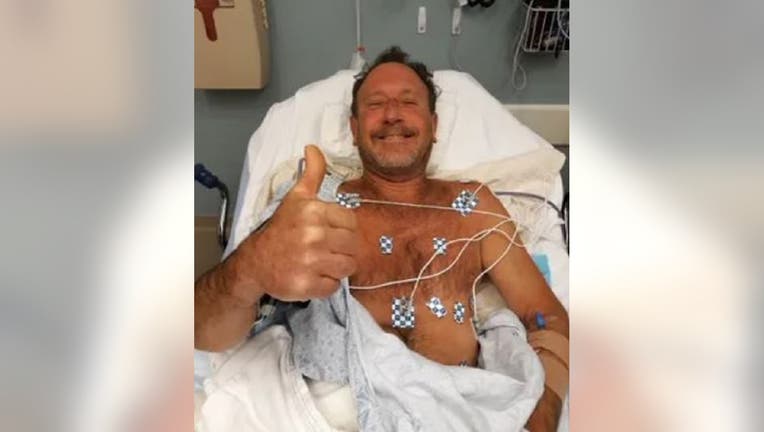 Michael Packard, 56, recovers in a Cape Cod hospital after being swallowed by a humpback whale Friday off the coast of Massachusetts. (Packard family)

A commercial lobster diver says he was swallowed whole by a whale off the Massachusetts coast Friday but made it out alive with only minor injuries following the life and death encounter.

Michael Packard, 56, of Wellfleet, was released hours later from a Cape Cod hospital following his scary encounter with a humpback whale. He told WBZ-TV he was 45 feet deep in the waters off Provincetown when the attack occurred.

He initially thought the whale was a shark but realized he was wrong when he didn't feel any teeth or pain.

"All of a sudden, I felt this huge shove and the next thing I knew it was completely black," Packard recalled Friday afternoon, according to the Cape Cod Times. "I could sense I was moving, and I could feel the whale squeezing with the muscles in his mouth."

"I was completely inside (the whale); it was completely black," he added. "I thought to myself, ‘there’s no way I’m getting out of here. I’m done, I’m dead. All I could think of was my boys, they’re 12 and 15 years old."

A gray whale calf was spotted with its mother in the waters off the coast of Southern California in January.

Packard said he thinks he was in the whale's mouth for about 30 seconds. He was able to breathe because he still had his breathing apparatus.

In an effort to save himself, Packard said he began shaking the whale's head before the animal surfaced and ejected him. In a Facebook post, he said the whale "spit me out" and that he escaped with bruises and no broken bones.

Packard's mate, Josiah Mayo, plucked him out of the water and headed back to shore. Fox News has reached to Packard but has not heard back.

Experts told the newspaper that humpback whales are not aggressive animals, especially toward humans.

"Based on what was described this would have to be a mistake and an accident on the part of the humpback," said Jooke Robbins, director of Humpback Whale Studies at the Center for Coastal Studies in Provincetown.