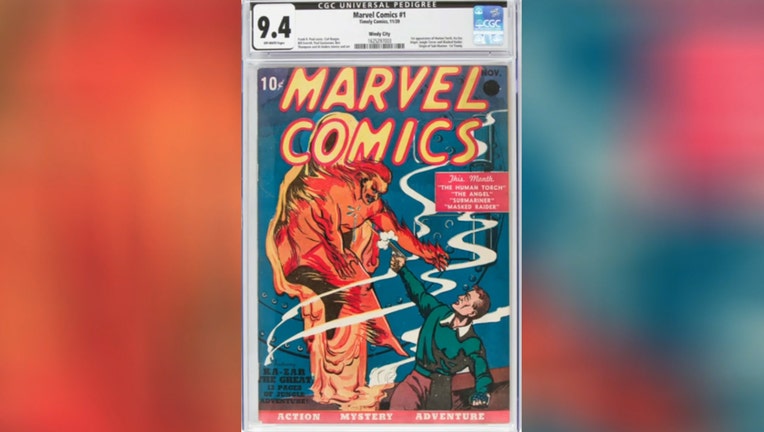 Known as the Marvel Comics No. 1 "pay copy," it's "arguably one of the top three comic books in the world of comics collecting," said Vincent Zurzolo, chief operating officer of ComicConnect. The New York-based auctioneer sold the book Thursday night for a bit under $2,427,800.

The buyer's name has not been disclosed. He is "an extremely passionate comic book collector and investor" who also collects other items, Zurzolo said.

Published in 1939, Marvel Comics No. 1 introduced characters including Sub-Mariner and the original Human Torch, a precursor of the character of the same name that was later a member of Marvel's Fantastic Four. The book launched what became the Marvel universe of comics, movies, TV shows and video games.

The very well-preserved "pay copy" is especially sought-after because it bears the publisher's handwritten notes recording how much the multiple writers and artists were paid. For example, Frank R. Paul earned $25 for drawing the cover of a book now worth nearly 100,000 times as much.

"It's an incredibly important look into the world and behind the scenes of the creation" of a comics powerhouse, Zurzolo said.

The Marvel universe would eventually include such characters as Spider-Man, the Fantastic Four, X-Men, the Avengers, Iron Man, Daredevil and the Hulk, often known on-screen as the Incredible Hulk.

"Without this comic book being made, who knows? Maybe none of that happens," Zurzolo said. "Maybe the name 'Marvel Comics' resonated so much with people, in some way, that that's what helped to birth all these other things."

One of Andy Warhol's iconic paintings of Marilyn Monroe is coming to auction — and Christie's auction house has estimated the sale price could hit around $200 million.