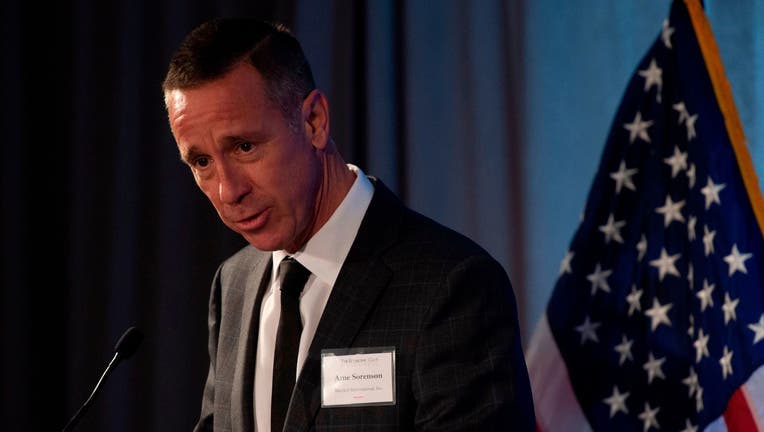 CEO of Marriott International, Arne Sorenson speaks during a discussion with The Economic Club Global Initiative Program at the Ritz-Carlton hotel in Washington, DC on November 26, 2018. (Photo by ANDREW CABALLERO-REYNOLDS/AFP via Getty Images)

The 62-year-old CEO of the Bethesda-based hospitality giant temporarily reduced his schedule earlier this month due to "more demanding" cancer treatment. He was first diagnosed with cancer in May 2019.

He became the CEO of the hospitality company in 2012, the first not bearing the Marriott surname, and helmed the company through its acquisition of Starwood Hotels and Resorts. Sorenson had been with the company since 1996.

Marriott is expected to name a new CEO in the coming weeks. The companies operations are currently being overseen by Marriott executives Stephanie Linnartz and Tony Capuano, who were tapped to head up the responsibilities when Sorenson stepped back from his day-to-day duties earlier this month.

Sorensen first announced that he would be "temporarily reducing his schedule" in a statement issued Feb. 2, to undergo "more demanding" cancer treatment. At the time, he was expected to step back for several months.

"Since my diagnosis, I’ve been working with a great medical team at Johns Hopkins to treat this cancer," Sorenson said. "While I have worked throughout my treatment to date and plan to remain as engaged in the business as my health allows, the right thing for me, my family and the company is to focus on my health. I know Stephanie and Tony will work with Marriott’s strong executive to continue to move the company forward. I, alone with my family and my medical team, remain optimistic about my prognosis and I plan to return full-time after the conclusion of my treatments."

Arne Sorenson was a true visionary who did tremendous things for Marriott and the State of Maryland. In 2019, I had the honor of awarding Arne with the Governor's International Leadership Award for all of his work and contributions to the community. It was only weeks later when we learned that he had been diagnosed with pancreatic cancer. Even as he fought this battle throughout 2020, Arne agreed to be part of our Maryland Coronavirus Recovery Task Force, where he was characteristically generous with his time and insight about safely reopening our state.