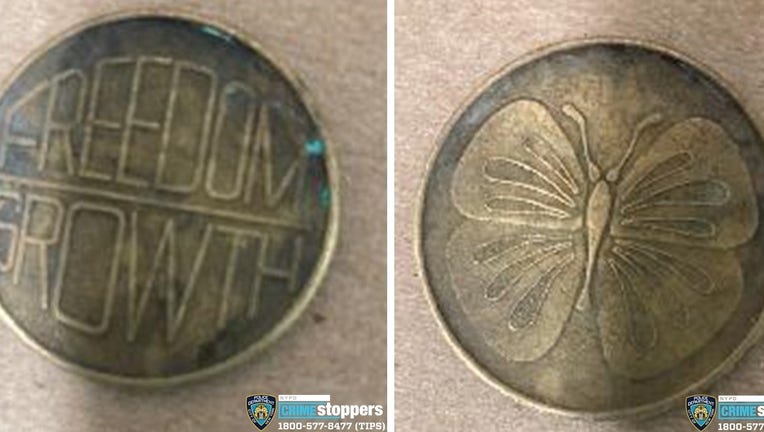 A sobriety coin found in the possession of a man found dead in the East River. (Credit: NYPD)

NEW YORK - The NYPD is asking for the public's help identifying the body of a man who was pulled from the East River off of Queens.

According to authorities, just after 8 a.m. on May 26, police responded to a 9-1-1 call of a body floating in the waters of the East River, just off of Hunters Point. The body was recovered and brought ashore.

The body has been described as a white man, wearing a long-sleeve brown shirt, camouflage pants, and black sneakers. He has a small scar near his right ankle and no tattoos.

The man was in possession of two 50-cent coins and a sobriety coin that reads "Freedom" and "Growth" on one side and has a butterfly design on the other.

The New York City Medical Examiner will determine the man's cause of death and an investigation into the incident is ongoing.

Anyone with information in regard to the man's identity is being asked to call the NYPD's Crime Stoppers Hotline at 1-800-577-TIPS (8477) or for Spanish, 1-888-57-PISTA (74782). The public can also submit their tips by logging onto the Crime Stoppers website at WWW.NYPDCRIMESTOPPERS.COM, or on Twitter @NYPDTips.