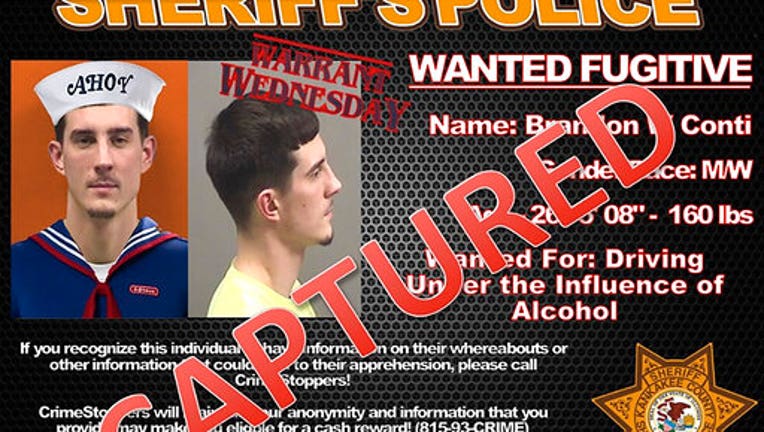 This screenshot from the Kankakee County, Illinois, Sheriff's Police, Oct. 30, 2019, Warrant Wednesday Facebook posting, notifies the public that Brandon W. Conti has been captured under a DUI warrant. Authorities say that Conti surrendered after pol

KANKAKEE, Ill. (AP) — All it took for one fugitive in Illinois to turn himself in was a little photo manipulation.

WBBM-TV in Chicago reports that the Kankakee County Sheriff's Department posts notices about fugitives on its Facebook page each Wednesday.

This week, the department posted a picture of Brandon W. Conti. The 25-year-old was wanted for failure to appear on a drunken-driving charge.

Conti commented on the post and asked, "Where's my costume?"

Sheriff's office staff then edited the photo to add a sailor suit and a hat that read, "Ahoy."

An officer wrote, "We held up our end of the bargain."

Conti replied with laughing emojis, noting he would turn himself in "before noon" and asked that police "have the paperwork done and ready." The department confirms Conti subsequently turned himself in.