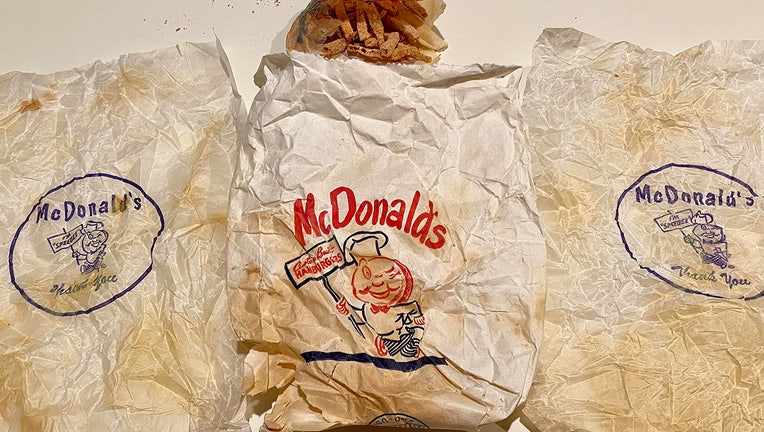 Old Mcdonald’s bags and fries found in the wall of a home built in 1959. (Rob Jones)

Rob Jones of Crystal Lake, Illinois, was renovating the front half bathroom of his home on April 16 when he made a peculiar discovery inside one of the walls. Jones found what appeared to be an ancient bag of McDonald’s complete with burger wrappers and half-eaten very, very old fries.

Jones and his wife were removing the old toilet paper holder from the wall when they noticed a rag inside, he told FOX TV Stations.

"We pulled the rag out and could feel something wrapped inside it. We were happy to find just the McDonald’s bag and not something worse," Jones said.

The particular logos on the bag and wrappers that Jones found appeared to be from the first and original logo from the 1950s, with Speedee, McDonald’s original mascot before Ronald McDonald, holding a sign reading: "I’m Speedier" and "Custom built hamburgers."

Coincidentally, Jones said his home was built in 1959 and it was just down the road from one of the original McDonald’s in his area.

An additional and somewhat frightening bonus: the leftover fries did not smell, according to Jones.

"Had we not been renovating they probably would’ve sat there another 60 years," Jones joked.

Jones posted the photo of his new discovery on Reddit and comments poured in with jokes asking Jones to let them know how the nearly 70-year-old leftover fries tasted and even going so far as to tell Jones he should save the fries for someone to examine.

"The way it crumbles into petrified potato dust. So good. I recommend pairing them with ketchup," one commenter joked.

"You, sir, are officially an archeologist," another commenter said.