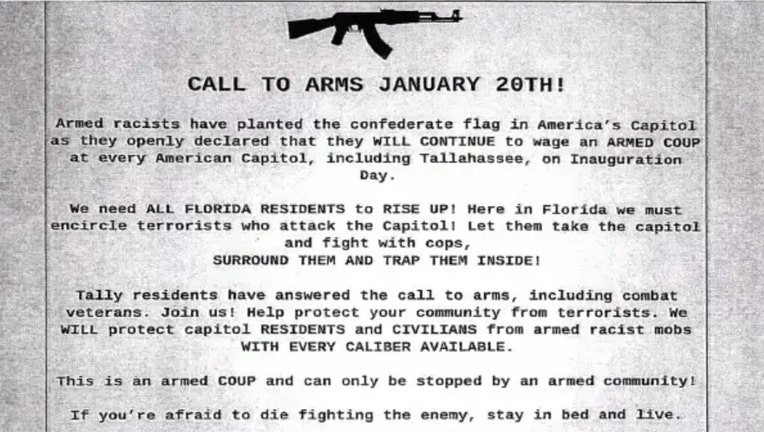 TALLAHASSEE, Fla. - A Florida man was convicted Thursday of trying to organize an armed response to supporters of former President Donald Trump for an expected gathering at the state Capitol in January ahead of Joe Biden's presidential inauguration.

Daniel Alan Baker, 33, of Tallahassee, was convicted of two counts of transmitting a communication in interstate commerce containing a threat to kidnap or injure another person.

Baker used social media to recruit people in a plot to create a circle around protesters and trap them in the Capitol, according to the FBI. Court documents describe what it said were a series of threats of violence made by Baker, along with a prediction of civil war. Baker was described as anti-Trump, anti-government, anti-white supremacists and anti-police.

"The free exercise of speech is central to our democracy," acting U.S. Attorney Coody said in a news release. "However, the defendant’s threats of armed violence to inhibit expression of political views different than his own are both unlawful and dangerous."

There were nationwide alerts about potential protests at state Capitols the weekend before Biden was sworn in, prompted in large part by the Jan. 6 insurrection at the U.S. Capitol by Trump supporters.

In Florida, law enforcement agents were in position on the roof of the Senate and House office buildings, the Supreme Court and the Tallahassee City Hall, which is a block from the state Capitol, but no significant protests materialized.

Baker was kicked out of the Army in 2007 after going AWOL before being deployed to Iraq, according to authorities. An FBI affidavit said Baker was then homeless and largely unemployed for the following nine years, most of the time in Tallahassee.

"If you are afraid to die fighting the enemy, then stay in bed and live. Call all of your friends and Rise Up!" Baker wrote on a Facebook event page he created, according to the affidavit.

Baker is scheduled to be sentenced in August. He faces up up to five years in prison, a $250,000 fine and three years of supervised release on both counts.