Police in Springfield, Illinois, were investigating shots fired in April 2020 when they pulled a man over and mistook his daughter’s ashes for a container with drugs — which led him to sue police and the city.

SPRINGFIELD, Ill. - Newly obtained bodycam footage shows the moments at the center of an Illinois man’s lawsuit claiming police officers mistook his 2-year-old daughter’s ashes in a small urn for drugs during a traffic stop.

Dartavius Barnes was pulled over on April 6, 2020, in the city of Springfield, Illinois, according to the lawsuit. Video obtained recently by WICS-TV and FOX Illinois shows the incident unfold as officers searched Barnes’ vehicle while he was handcuffed and detained.

The lawsuit claims the officers "desecrated and spilled out the ashes" of Barnes’ daughter who had died a year earlier.

While being handcuffed, an officer can be heard asking in the footage if Barnes had anything in his car.

"Not really," Barnes can be heard responding, before admitting he had marijuana.

"No problem if I search?" the officer asks Barnes.

Officers found an illegal amount of marijuana and a small cylinder object containing what they believed was ecstasy or meth, according to WISC-TV, citing the police report.

Police confronted Barnes, who was handcuffed in a nearby patrol car, claiming the container had tested positive for meth or ecstasy. A confused Barnes can be heard asking to see what they found.

Officers went to test the contents of the urn again but decided they believed him. The urn was given to Barnes’ father, who was waiting up the street, WISC-TV reported. Barnes was released and given notice to appear in court for the illegal amount of marijuana found. 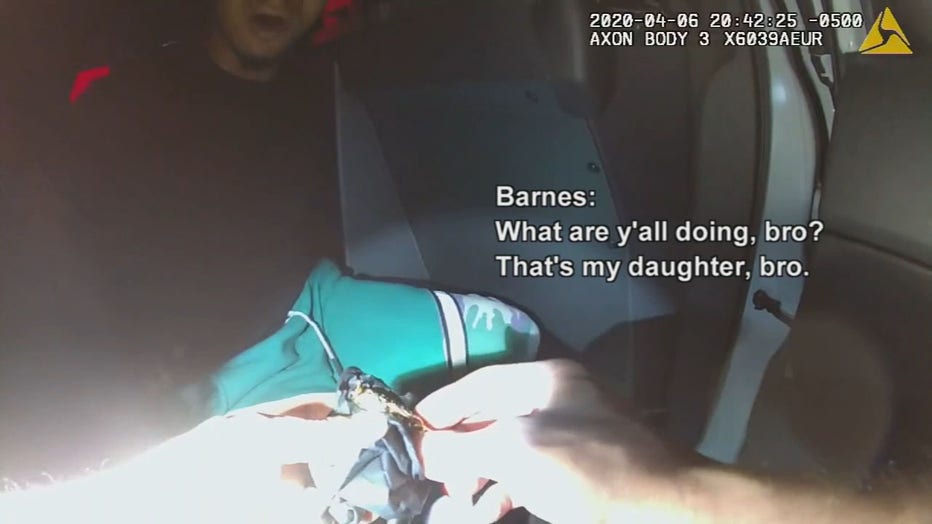 Bodycam footage obtained by WICS-TV and FOX Illinois shows an officer holding the small urn on April 6, 2020, in Springfield, Illinois.

Barnes’ daughter, Ta’Naja, died in early 2019 after police found her unresponsive and wrapped in a urine-soaked blanket, according to WICS-TV. Her mother, Twanka L. Davis, and her boyfriend were later sentenced to prison for the toddler’s death.

Barnes filed a lawsuit in October against the City of Springfield and six police officers involved in the traffic stop. He alleged in the complaint that the officers unlawfully searched him and his vehicle, unsealed and opened the urn containing his daughter’s ashes without consent and spilled some of them during the process.

Attorneys representing the city and Springfield police officers did not immediately return a request for comment.

In a response to the lawsuit, the officers denied the allegations and said they’re "entitled to qualified immunity as their conduct was justified by an objectively reasonable belief that it was lawful," court records show.

A jury trial has been scheduled for Aug. 16, 2022, according to court records.